Don’t miss this newly released clip from Amazon Prime Video’s series, Lore, which is premiering Friday, October 13. The clip premiered at the NY Comic Con panel and is from the Lore “Unboxed” episode. It is about a child without friends named Robert Gene Otto, that is, until he receives a doll as a gift. He names the doll after himself, Robert. They become fast friends and soon the boy believes the doll is real. But to everyone else … Robert the Doll is a curse.

Mentioned during the panel:

“I like to focus on stories that are on the fuzzy line of reality.” –Aaron Mahnke

“Podcasts are exciting because it allows people outside of the stereotypical Hollywood to emerge as storytellers.” –BP Jenkins

“The scariest stories are true and this is a way to bring it to life.” –Gale Anne Hurd 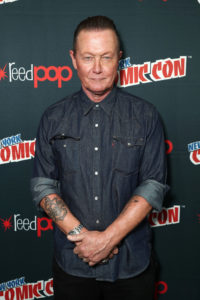 “The chance to do a period piece and go deep with the character was a lot of fun.” –Robert Patrick

“This next generation network idea that you see with Amazon is powerful.” –Aaron Mahnke

“The more outside the box it is, the more Amazon is into it.” –Kevin Smith

About Lore
Premiering Friday, October 13 on Amazon Prime Video, Lore is a 6-episode series based on Aaron Mahnke’s popular podcast of the same name with over 5 million monthly listeners, from superstar producers Gale Anne Hurd (The Walking Dead), Ben Silverman (The Office) and Glen Morgan (The X-Files). The unscripted horror anthology will present tales dealing with frightening, psychologically disturbing, and often paranormal true events that have spawned modern-day nightmares.