“HALLOWEEN COMES EARLY; “THE TWILIGHT ZONE” AND “TALES FROM THE CRYPT” HAVE A BABY!” 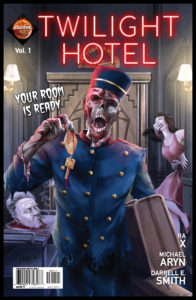 The journey begins, from comic book to motion picture, “TWILIGHT HOTEL” is a BLOOD-SOAKED love letter to these two-classic horror / sci-fi brands.

“IT SUCCEEDS WHERE MANY OTHER HORROR ANTHOLOGIES FAIL. IT STRIKES THE PERFECT BALANCE, WITH THE RIGHT RECIPE — DARK, FUNNY, SHOCKING, SMART AND EDGY; ALL THE ELEMENTS THAT WILL COME TO DEFINE SQUARE BIZ ENTERTAINMENT” – Ra X 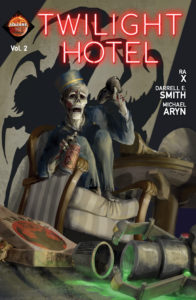 Joined by artist Michael Aryn, the team’s plans are in motion to produce this four-volume series and feature film, that tells the story of a 100-year-old West Florida hotel that has a very sinister secret. Built on land that was once the home of the most notorious plantation in all of North America, where thousands of African slaves and Seminole Indians were murdered in ritualistic ceremonies. It is also home to an ANCIENT EVIL DEITY named… “SHE”. With a supernatural ability to attract and influence people, she lures unwitting individuals to the Twilight where they are subjected to many horrible things including, MAN-EATING BED BUGS, PSYCHOTIC GANGSTERS, ZOMBIES, SERIAL KILLERS and worst of all… themselves.

Vol.1 hits store shelves, around the world, this Friday 13th, A Kickstarter campaign in support of the project launches on the same date! The project’s creators hope to hit their fundraising goal by Halloween so, anyone interested in checking out the campaign can go to (https://www.kickstarter.com/profile/twilight-hotel-vol-1) Copies of Vol.1 and other very cool backer rewards are available! Also, the screenplay for the feature film, written by Ra X, is expected to go into production late next year.