Shudder, the AMC-backed thriller, suspense and horror streaming platform, continues to makes waves with its fright-filled Halloween rollout as it announces the Shudder premiere of the legendary Universal Monsters films!

Shudder continues to elevate its specially curated catalog with the Universal Monsters films, joining the ranks of the many legendary horror films that have been released on the service this year. 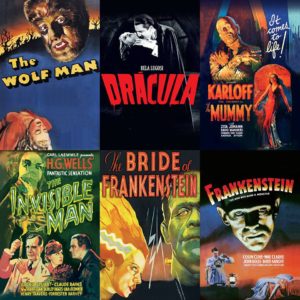 Frankenstein – Boris Karloff is the screen’s most memorable creature in the story of Dr. Frankenstein, who pieces together salvaged body parts to create a human monster.

Bride of Frankenstein – Karloff returns as the screen’s most misunderstood monster and Elsa Lanchester stars as his ill-fated bride in one of horror’s all-time greats.

The Invisible Man – Claude Rains stars as a mysterious doctor who discovers a serum that makes him invisible and slowly drives him to commit acts of terror.

The Mummy – Boris Karloff stars as the mummy Im-Ho-Tep, a high priest who is revived by British archaeologists 3,700 years after being embalmed alive.

The Wolf Man – Lon Chaney Jr. stars in this horror masterpiece about a man who is attacked by a werewolf and then becomes one himself at each full moon.

ABOUT SHUDDER
AMC Networks’ Shudder is a premium streaming video service, super-serving fans of all degrees with thrillers, suspense, and horror. Home to the largest and fastest-growing human-curated selection of high-quality, spine-tingling and provocative international and independent films, TV series, and originals, there’s always something new and unexpected for Shudder members to explore. Shudder’s expanding library is available in the US, Canada, UK, and Ireland on the web, iOS, Android, Chromecast, Apple TV, Fire TV, Xbox One, and Roku for $4.99/month or $49.99 with an annual membership. Join the Shudder community experience commitment-free for 7 days, visit www.shudder.com.