-PH: Being the star I’m not sure if you were privy to those early thinktank conversations but as far as you know, where did the inspiration come for the Bunnyman movies?

-Marshal: To be honest, I couldn’t tell you how, where, or why Carl came up with the concept of Bunnyman, and I’m not certain I ever want to know ☺ Carl is a creative freak. And I say that in the most loving and respectful way. His imagination is a scary and very odd place. The stuff that runs amuck in his head is frightening. Its funny, but most of the guys that I’ve met that delve into the dark depravity of genre films have been some of the most unassuming and quiet people you’ll ever meet. Don’t get me wrong, Carl is strong willed and has a definitive opinion on things, but you’d never suspect that while shaking his hand a seeing his smile, that deep within lays an unfiltered distorted imagination. I have another Script that he wrote called “Blood Angel”, about a time traveling Nazi named “Icarus” that has landed back on earth in search of his genetic offspring, as he attempts to recreate his bloody version of the 3rd Reich. I’m attached to the film playing an older, skeptical, grizzled Detective that’s trying to figure out how to protected the young girl at the heart of the story. It’s a crazy psychological time travel dream-like story in its Steam Punk Industrial vision. It’s so gnarly and poetic in its spirit. It’s very unique and I can’t wait to get working on it.

-PH: These movies are obviously entertaining, and a lot of fun, but they seem to possess some opportune comments on our times too – don’t you think?

-Marshal: Wow, there’s an interesting take on the film. I’m not certain I can connect any relevant social commentary based on a slasher horror film. I’m sure I could find an intellectual thread along the lines of how Bunnyman’s anger reflects a smoldering resentment, loneliness and disenfranchised sense of hopelessness, so he lashes out at people that are happy because he’s jealous, crying out for attention? Very much like the individuals that are responsible for the recent mass murders over the last few years? Or perhaps the reason he wears the Bunnyman suit is that he wants to hide his hideous nature behind an icon of childhood innocence, the Easter Bunny? Hell, I don’t know. I really never gave it much thought. Carl would be a better source for that inquiry. I do know that in the last Bunnyman offering Carl was wanting to tie up some loose ends in the Bunnyman’s back story, motivation stuff.

-PH: Is Sheriff Clint Baxter out there in the world, you think?

-Marshal: Oh for sure. I’d venture to say there’s a Clint Baxter in every town in America.

-Marshal: Yup, many times, and I know for certain there’s one in New Mexico. Humorless bastard nailed me for a speeding ticket just outside Albuquerque on my drive back from filming “ASTRO”. He was even wearing one of those State Trooper cowboy hats and sunglasses. I literally saw Baxter staring back at me. I tried to smooth my way out of it. He just stone faced me with “…License and Registration…” Dude was nails.

-PH: What appealed to you about this particular role?

-Marshal: I’ve also always been attracted to the stoic nature of old western and rural characters, and if I can put that kind of spin on a character then I know its going to be fun for me. Sheriff Baxter had that kind of Vibe. I think that Carl probably sensed those qualities. And the fact that I fit the shirt didn’t hurt ☺

I love the old West! I truly do feel as though I was born in the wrong century. Sheriff Baxter was a hard boiled, kick ass country sheriff, a “Good Guy” only because he hated idiots more than himself ☺ There’s is just something about cowboy boots, a crisp cowboy hat, sunglasses and an ornery attitude that makes for a fun afternoon of filming. 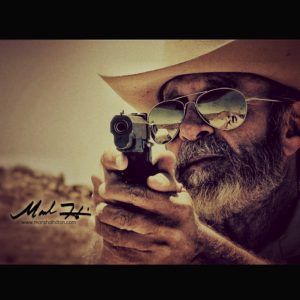 -PH: How did Carl Lindbergh pitch you the character? Why do you think he chose you for this particular part?

-Marshal: Well to be honest with you, I fit the shirt, seriously ☺

This is one of those odd little Hollywood stories I suppose. I met Carl in my audition for the second Bunnyman film, “Bunnyman Vengeance”. I did a scene with an actress for him in a casting session. We did the scene, Carl said thank you to the actress and she left the room. Carl asked me to stay, reached into a bag underneath the table and pulled out a Sheriff’s shirt and said “…Try this on…” The shirt fit, and he said, “…You have the part…” And that’s how it went down. I still wonder from time to time what would have happened if I didn’t fit the wardrobe? If I had eaten that Grande Sour Cream and Chicken Burrito with extra Guacamole I might have never been killed by a giant, chainsaw wielding, psycho guy is a Bunny suit.

Here’s a bit of trivia for you. In the original script Carl sent to me the “Sheriff” didn’t have a name. He was just attitude on paper, a quiet stillness about him. He didn’t say a lot but would kill you with a stare. I’m a huge Clint Eastwood fan so I asked Carl if we could name him Clint. The last name Baxter just sounded hard and nasty. He liked the name so Clint Baxter came to life. After I named him, everything fell into place, his essence, his walk, his rhythm, his outlook on the world, his pacing.

-Marshal: Several actually. I have a number of projects in various stages of Post Production but these are the nearest to completion.

I have a film coming out soon that I’m very excited about called “Primal Rage” (formerly “Primal Rage, the Legend of Oh-Mah”) that we shot in the forests of Northern California and Oregon. It’s directed and created by Practical FX Master Patrick Magee. Patrick is a genre veteran that has worked in the trenches of independent film for many years. As a collaborator, he get’s it. He was a gracious and caring host. The cast and crew was a terrific bunch of team players. We hiked and ran around out in the forest for several weeks. It was one of the more enjoyable shoots I’ve been on in many years. Although I generally do not watch my work in public, I did watch a private screening of the film. It’s done really well. It’s most definitely a Theater experience film. Stunning forest visuals, action, suspense and a thundering sound track. It’s an intense experience. The best description I can give you is, think Arnold’s “Predator”, in the deep forest, with angry fur and carnage. I’m confident in saying that the legend of Bigfoot will never again be seen in the same light. It’s going to have Theatrical Release in early 2018. There’s a teaser trailer for the film on YouTube. (https://www.youtube.com/watch?v=1O6_oCHzog8) You can follow me, or the film, on social media to stay tuned as to the exact dates. 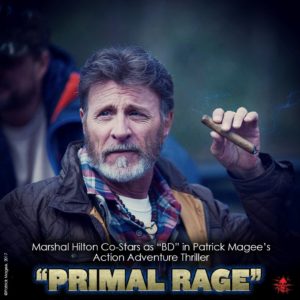 I also just finished shooting a Dramady Episodic Pilot titled “FLICKS” that will be pitched to FX, Netflix, Amazon, and all the usual suspects. It’s a quirky character driven story about a struggling screenwriter whose been bumping around town for 10 years and just cant seem to break through Hollywood. I play his agent Elan, a rough and tumble, fowl mouthed, bull in a china shop Talent Agent. He’s an animal. It very much has the Indie feel of a show like the Jim Gaffigan show. It’s a small intimate slice of life piece. My description of the story theme is something along the lines of “Entourage”, except the main characters are still eating Top Ramen and can’t seem to catch a break. It’s about all the insanity and failures people deal with on the “lower levels” of the Hollywood swamp. There’s definitely no lack of storylines.

In December of last year I Co-Starred in a Sci-Fi Adventure Drama feature with Gary Daniels, titled ‘ASTRO”, co- written by Asif Akbar and Bernard Selling, and Directed by Asif Akbar. We shot it in Roswell New Mexico. Also in the ensemble cast are Louis Mandylor, Michael Pare’, Randy Wayne, Dominique Sewain, Max Wasa and others. I play “Alexander Biggs” a mysterious billionaire space entrepreneur who recruits an old friend and colleague to help him discover the mysteries of an extraterrestrial life form he’s discovered in another solar system. It’s currently in Post Production and I assume it should be out sometime in 2018. 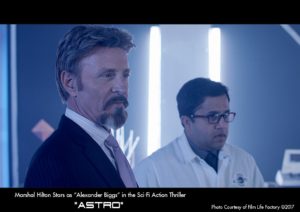 I also will have a Supernatural Thriller Film hitting the Festival circuit in early 2018 titled ‘Echoes of Fear”. It’s a Supernatural Horror Thriller by husband and wife team Brian and Laurence Avenet-Bradley, the creative team behind “GHOST OF THE NEEDLE”, “DARK REMAINS” and “MALIGNANT”. I can’t give you too much here, other than to say I play “David”, a kind-hearted yet nosy next door neighbor who Alysa ( Trista Robinson ) keeps running into as she confronts the haunting of her grandfather’s house.

You can keep tabs on what going by following any one of my social media profiles. We’re constantly putting up news and info.
Official Desktop Site: http://www.marshalhilton.com/
IMDB: http://www.imdb.com/name/nm0385288/
Twitter: https://twitter.com/MarshalHilton
Facebook: https://www.facebook.com/marshal.hilton
Instagram: http://instagram.com/marshalhilton