Writers never really die; their stories live on, to be found again, to be told again, to scare again… 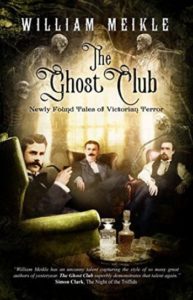 In Victorian London, a select group of writers, led by Arthur Conan Doyle, Bram Stoker and Henry James held an informal dining club, the price of entry to which was the telling of a story by each invited guest.

These are their stories, containing tales of revenant loved ones, lost cities, weird science, spectral appearances and mysteries in the fog of the old city, all told by some of the foremost writers of the day. In here you’ll find Verne and Wells, Tolstoy and Checkov, Stevenson and Oliphant, Kipling, Twain, Haggard and Blavatsky alongside their hosts.

Come, join us for dinner and a story: 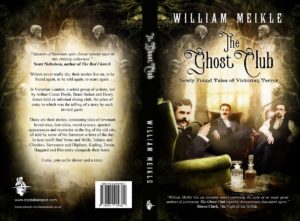 “William Meikle has outdone many authors who have tried their hand at doing something similar – the tales have the feel and texture of their time, including speech mannerisms, equipment, architecture, and much more. There’s a sense of immersion in these tales which makes it feel as if the stories occur in the same world, almost side by side, instead of being told by the writer while sitting at a table with his or her peers.”

“An excellent recreation of the Victorian ghost story. Meikle succeeds in recreating the feel and pace of each other. It’s a truly admirable book. Perhaps the worst part of it coming out so late in 2017 is that many awards will overlook it.”

“THE GHOST CLUB more than earns it’s place next to the classics on any horror purist’s book shelf, William Meikle has earned a place with the authors of those classics. A magnificent collection of dark delights. Highest possible recommendation.”

“The Ghost Club is a massively ambitious anthology of stories ‘by’ classic authors as imagined by the extremely talented William Meikle. Massively entertaining, too.”

“William Meikle is an audacious writer! In The Ghost Club he takes on the personalities of literary icons Bram Stoker, Arthur Conan Doyle, Jules Verne and the like and creates stories they might have told, mimicking their voices and writing styles. And he makes that work! I have too many favorites to name but as I read from start to finish, the stories just got better and better and I found myself as absorbed as if I were reading spooky tales told by these master storytellers. Kudos to Meikle! Lovers of traditional and quirky ghost stories need The Ghost Club in their library!”

Get your copy of this ghostly book at:

I am a Scottish writer, now living in Canada, with over twenty novels published in the genre press and over 300 short story credits in thirteen countries. I have had books published with a variety of publishers including Dark Regions Press, DarkFuse and Dark Renaissance, and my work has appeared in a number of professional anthologies and magazines with recent sales to NATURE Futures, Penumbra and Buzzy Mag among others.

I live in Newfoundland with whales, bald eagles and icebergs for company and when I’m not writing I drink beer, play guitar and dream of fortune and glory.

I don’t know where the ideas come from. I’m just glad that they come. It’s been over twenty five years now. I think it’s enthusiasm that keeps me going. I just love adventure stories with guns, swords, monsters and folks in peril.

And therein lies my secret. I haven’t grown up.

-Find more of his books and audiobooks