Playing off a universal socio-political fear, MIDNIGHT CLEAR preys on something lurking in the back of every American’s mind, made all the more frightening by taking place on the day when our guard is down — Christmas.

More About Midnight Clear: An unstable husband forces his family to celebrate a macabre and deadly Christmas.

Joe Russo is the producer of the upcoming horror anthology feature, NIGHTMARE CINEMA, and the critically acclaimed horror podcast, POST MORTEM with Mick Garris. In February of 2017 Joe directed the Valentine’s Day horror short, BE MINE, for Eli Roth’s Crypt TV and he has been featured on the 2016 and 2017 Blood List – the top 13 best unproduced genre screenplays of the year. 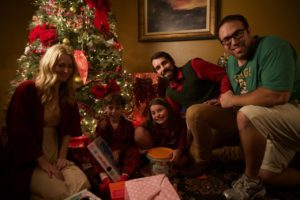