Time to do a little horror shopping at…

High school underdog Hoax Wilmoth (Stephen Geoffreys, Fright Night ) fills up the idle hours in his seedy little hometown fending off the local leather-jacketed thugs, avoiding his overbearing mother (Sandy Dennis ) and dreaming of a date with trailer park temptress Suzie ( Lezlie Deane). But his quietly desperate life takes a terrifying turn when his cousin introduces him to an unusual new hobby – phoning in for his Horrorscope. Hoax is hooked up with a compellingly hideous demonic force that slowly begins to overtake his entire life and now there’s more than just a phone bill to pay for anyone who ever dared cross “the neighborhood nerd”. 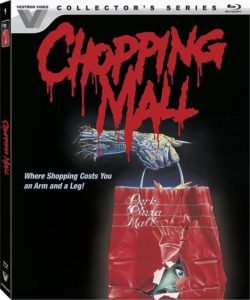 Eight teenagers are trapped after hours in a high-tech shopping mall and pursued by three murderous security robots out of control. 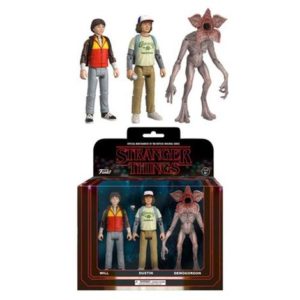 From Netflix’s original series Stranger Things, some of your favorite characters from Hawkins, Indiana are joining the Funko action figure line! Each figure stands 3 ¾ tall and are fully articulated. The Stranger Things Action Figure 3-Pack Set #2 includes Will, Dustin, and the Demogorgon figures along with character specific accessories! The set comes packaged in a hangable window display box. Ages 6 and up. 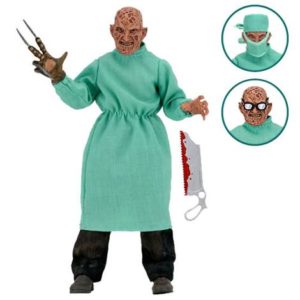 He stands 8″ tall and is dressed in intricately detailed and tailored fabric clothing similar to the iconic toy lines of the 1970s. In addition to his fabric clothing, Surgeon Freddy also wears removable surgical scrubs, mask and hat. He’s fully poseable and comes complete with sunglasses and bone saw accessories.

It’s The LDD Figures – Evil Dead 2 – Ash.
He survived a night in the cabin, he fought the Deadites and won, he has the coolest prosthetic hand ever, and he’s the latest addition to the Living Dead Dolls family!
Hail to the king baby: it’s Ash from the film Evil Dead 2 and he is ready to spray some Deadite brains all over aisle 5.
Straight from the classic horror comedy Evil Dead 2, comes the unlikeliest of heroes. Ash comes with his infamous chainsaw hand, a rifle, and the Necronomicon.
Ash stands 10″ tall, features 5 points of articulation, and comes packaged in a collector friendly, specially die-cut window box.

The Exorcist burst onto the cinematic scene in 1973 and quickly cemented its place in film history as the 1st horror film nominated for an Academy Award. The film tells the terrifying story of the demonic possession of a young girl and her Mother’s attempts to win back her child through an exorcism conducted by two priests.

Now The Living Dead Dolls welcome the tormented youth into their family with a new doll that is sure to make heads spin. Based on the groundbreaking FX used in the film to portray demonic possession, The Living Dead Dolls have created an all-new head sculpt to capture the instantly recognizable appearance of the main character.

The devil is in the details and each of them have been captured here; from her wild hair and crazed eyes to her maniacal grin. Not only has her screen accurate floral pattern nightgown been recreated, but the HELP ME inscription on her stomach has been reproduced as well. 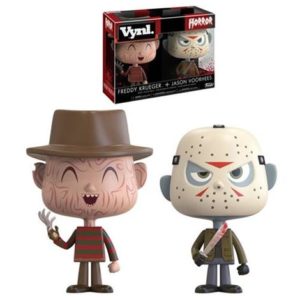 There’s no “i” in team and this is definitely one dynamic duo! Freddy and Jason are teaming up in this set of VNYL stylized figures, bringing the two beloved characters together as vinyl figures. The Horror Freddy and Jason VYNL Figure 2-Pack comes packaged in a window display box and each figure measures approximately 3 3/4-inches tall. Ages 3 and up. 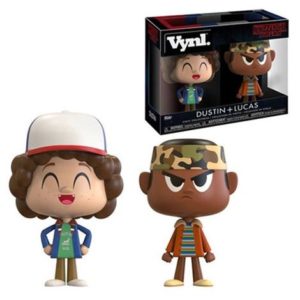 Investigate the Upside Down with a little help from the experts! Your favorite character from the Netflix hit Stranger Things have stepped into the VYNL collection format. The Stranger Things Lucas and Dustin VYNL Figure 2-Pack comes packaged in a window display box and each figure measures approximately 3 3/4-inches tall. Ages 3 and up.

The star of five CHILD’S PLAY films, Chuck! How do you make a 15″ tall homicidal doll containing the soul of a serial killer even more terrifying? Make it talk! With seven spine-chilling phrases pulled directly from the films, this Chucky is guaranteed to thrill. Chucky features realistic glass-like eyes, and a (plastic) knife that he is sure to use for no good. Remember, he’s your friend to the end!

Those are some pretty awesome items for horror fans, and there’s plenty more to find at…