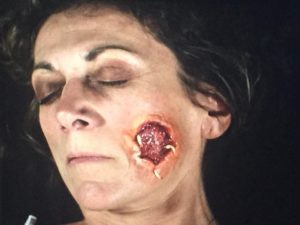 -Nicoleta: When I was 7 or 8 years old I saw a horror movie that got me really scared. My sister told me nothing was real. From that moment I started to watch a lot of horror movies just to understand how is that possible. So I think that’s the moment I became a fan of this genre because I can’t et enough of this films since then.

-Nicoleta: I was always impressed by the special effects they use in horror movies. My interest for this special makeup grew every year. And one day I decided to start practicing it. I wasn’t sure if that’s what I wanted to do later but my friends told me to go ahead if I love that so much.

-Nicoleta: I think women are as great as men in everything. « Women in Horror » month it’s a great way for us to show people what we can do. I know there are a lot of women who are very good in this genre and this is a good opportunity for them to show off their work.

-Nicoleta: Women already showed their power in this genre and there are a lot more who show their interest for this industry. Beside that women are seen more stronger than few years ago. And there is a new wave of female directors in this genre. They’re just starting their career and they’re already doing a great job. So I think we expect a lot of good things from women in horror.

-Nicoleta: There is a woman I take as a role model for me and it’s Ve Neill. I know she’s not in the horror genre but I think she is role model to follow. She won several rewards for her work. She’s one of the makeup artists who got to make a name in the special effects by her determination. I think every woman should follow her example and never let it go no matter how hard the situation is.

-Nicoleta: Here’s the link to my first short film:

We would like to thank Nicoleta Tigoulet for taking the time to answer our questions, but more importantly for her contribution to horror!