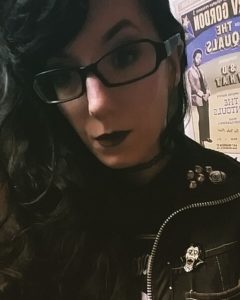 -Cecilia: I’ve been spooky since a very young age – was raised on books about spiders, witches, and mad scientists. But my interest in horror as a specific genre & my participation in the fandom blossomed with the first season of American Horror Story in 2011. Something just clicked.

-Cecilia: There was definitely a moment. I remember shying away from horror for so long because I couldn’t handle the abuse towards women and I always just figured that’s how it was, or that I was too sensitive. After finding several rape scenes particularly hard to handle & being dissatisfied with the way they worked in their narratives, I started asking friends if I was overreacting. The majority of the responses I got surprised me, because they mirrored my thoughts – they loved horror, but hated its lack of representation & sexism. I know people who avoid it for precisely those reasons despite WANTING to like it. When I realized that, I started thinking, “I’ve got to do something about this.”

-Cecilia: I might be wrong, but I think it’s the only established themed month within the horror fandom, which is groundbreaking. I think it’s about reminding horror fans that women are here in the genre, as well as uplifting and promoting female-centered projects and female creators.

-Cecilia: Jen & Sylvia Soska are two of my biggest role models in horror right now. They’re filmmakers with brains, bravery, heart, and a bite. Linda Blair and Sarah Paulson are also up there. That being said, I have an enormous amount of love for every woman who’s stepped foot in the genre and fought the restrictions & difficulties to make names for themselves in horror. All of us have something to learn.

-Cecilia: Horror has more female fans and creators now than ever before, which means that the roles we play are getting more attention and care. People still aren’t enormously willing to listen, but it’s happening, slooowly but surely.

-Cecilia: It can only get better from here. More opportunities, more recognition, more of a voice, more safety, more opportunities to tell unique stories from unique angles and I think that’s ultimately what WIHM is pushing for. 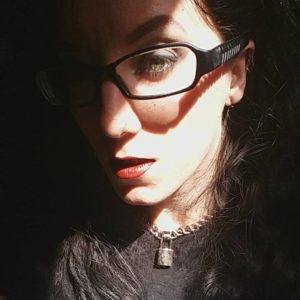 -Cecilia: I actually just started an FB page, Horror Scholar, which I’m building as a community of people who want to dissect horror and give it due scholarship. It’s a way of making academic thought about horror more commonplace. I’m also continually updating my season-by-season examination of sexual assault in American Horror Story, which looks at each instance of assault & its relevance to the plot to produce an overall pattern of how the show employs sexual assault. Everything will be put up on Horror Scholar, so you can watch for new projects there!

We would like to thank Cecilia Abate for taking the time to answer our questions, but more importantly for her contribution to horror!