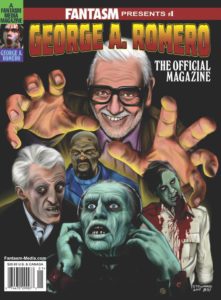 First, we’re excited to honor one of the hardest working women in horror movie history, actress and animal rights activist Linnea Quigley. From her earliest days as a model to her immortal turns in classics like RETURN OF THE LIVING DEAD and NIGHT OF THE DEMONS to her endless cavalcade of wild, untamed and often insane independent genre gems, Quigley has managed to elevate every movie she’s been in and weather many storms, always with a smile on her face. We love her. You love her. And Fantasm Presents #2: Linnea Quigley, the officially authorized magazine is a photo-packed Valentine to her legacy. Coming April/May 2018.

Then, we join forces with writer Victoria Price to celebrate the immortal work of her legendary father in Fantasm Presents #3: Vincent Price, this official, fully authorized magazine is a sharply written and handsomely designed look at the quintessential gentleman of horror. Featuring new and incredible interviews with famous folks who knew him best and essays analyzing some of Price’s greatest – and often most underrated – works, as well as his many adventures outside of cinema. Coming July 2018.

Celebrate 10 Years of Dexter With Us!

Can AI Finally Reveal The Truth? Roswell: The Final Verdict Debuts on discovery+