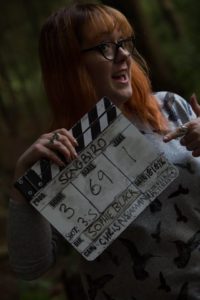 -Charlie: I think it would have to be when I came across Universal’s Frankenstein late one night on my old black and white TV in my bedroom when I was possible about 8 years old…my parents were asleep and had no idea I’d put the TV on! There was something about the film that made me curious and I think that was moment the horror fan in me was born.

-Charlie: I had always wanted to be an actress from a young age and when I was at secondary school I really developed a love and appreciation for creating film. When I was doing my A-Levels our genre study module was all about horror which just added fuel to the fire – I knew I wanted to create moments that would haunt and stick with people like the greats I was watching the work of both in front of and behind that camera. I don’t think I conciously decided to specifically go down the horror root, as I also studied Musical Theatre and Shakespeare at drama school, I think it happily happened naturally bringing together my love of horror as a voyuer and my passion to be an actress. 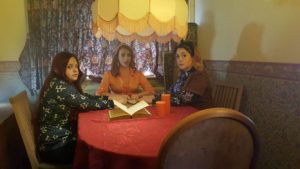 -Charlie: It means a lot. It’s so important that it is celebrated! I think traditionally women in horror were very much there to play the victim and served the male gaze, but more and more women are getting more varied roles in horror and breaking down those stereotypes. There are more female writers, directors and producers which is increible as when you think about most of the most famous horror filmmakers you think of John Carpenter, Wes Craven and the like but women are catching up and it’s nice to know that if I ever am the mother of girls who want to work in film they will have legendary females to aspire that stand alongside the greats I have just mentioned.

-Charlie: I adore Jamie Lee Curtis and her work, I really excited to see her back as Laurie in the new Halloween film. Vera Farmiga is another actress is aspire to be like, she has played some incredible roles. Jane Levy is my modern “final girl” crush, her performance in the Evil Dead remake was perfection and I love The Soska Sisters, they have created some incredible work and I would love to be working alongside them one day.

-Charlie: As I said before I think women in horror traditionally were very much there to serve a purpose as it were, now we are seeing women taking groundbreaking movements in the industry and there are more of us working all across the film industry – not just there for a look or to be a damsel in distress but creating, directing, producing, writing and kicking butt.

-Charlie: That we will keep creating incredible work. My hope is we will keep pushing the boundaries and shocking audiences and that somewhere in amongst the excitment I will continue to be a part of it. I would not swap being a woman in horror for anything!

-Charlie: I have just shot a micro short with Liam Banks aka SuperfreakMedia called ‘Wendigo’ which is set for release very soon. We also have a couple of other short films in the planning for the year in which I will have acting roles, including a ‘Blair Witch’ inspired short and another called ‘Best Friends Forever’ which we started last year and intend to wrap shooting on very soon. I have a few other non-horror projects coming up soon too and after producing SuperfreakMedia’s UK winning entry to the ‘My Annabelle Creation’ contest I might even take another dip into producing, but who knows!

I post to a vlog series on their called “Lights, Camera and a 9 to 5” as well as sharing my acting work, my latest showreel will be on there soon too.

Thank you so much to everyone at PromoteHorror.com and Women in Horror Month for having me along and for celebrating all the amazing scream queens of the industry!

We would like to thank Charlie Clarke for taking the time to answer our questions, but more importantly for her contribution to horror!