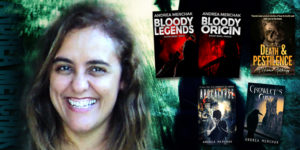 -Andrea: In the crib? When my sister and I were 4-5 years old, we used to sneak into the living room late at night when we were supposed to be sleeping, then turned on the TV to watch old horror movies. Shortly after we were both screaming for our dad to come and turn on the lights because we were too scared. Then he scolded us a bit and tried to convince us to go back to bed but in the end, we always convinced him to stay with us until the show ended.

-Andrea: To tell you the truth, I never thought about being an author before my sister came with the idea. I wasn’t in the best moment in my life and she thought that could help me somehow. I thought she was crazy. I didn’t even know if I could write a book. I am an avid reader, what if mine wouldn’t be good enough? Then she said, ‘if you don’t like it just don’t publish it’. I enjoyed it so much that I cannot think about doing anything else than writing horror.

-Andrea: I have to admit I had never thought much about it. I mean, about being a woman that writes horror. By the time I published my first book, I told a horror fan friend about it and he loved the idea and said that it was awesome since there aren’t many women horror authors out there. In fact, he didn’t know any Brazilian one. I thought that was crazy but then I realized that was true. So I believe that is extremely cool to show that there are women that not just love horror but write horror.

-Andrea: I am somewhat ashamed to say but I had to think hard when I read the question about a woman in horror. Immediately my mind was flooded with a dozen of men but not a single woman. This is sad. It is a fact that there are more men writing horror, but there are very good women writing horror out there; they are even famous, and yet we always think about men when it comes to horror. Even Stephen King can recognize the talent of Joyce Carol Oates, to name one. Maybe we, women horror writers, should stand and show that we are as good as any men writing horror. Maybe even scarier. I have friends that are afraid of me now, after they read my books.

-Andrea: Unfortunately, I don’t think it has changed much. Men are still the majority writing horror and the readers, maybe due to a stereotype, look primarily for male authors when it comes to horror. When I say I write horror, dark, vicious, gory, disturbed, scary horror, the kind that will chill you to the bone, people are extremely surprised mainly because I am a woman.

-Andrea: I think it will be a good future. In time, we will prove we are as good as any man in horror. It will take time, for sure, but we will eventually succeed. We can be as frightening as any man can be, sometimes even more, just because we are not afraid to go deep in the dark to scare you.

Go to my website https://author-am.wixsite.com/andreamerchak and sign up to my list to be the first to know about this project and the future ones. Just for subscribing, you win a short story that will be part of the book Fragments of Horror, to be release in late 2018.

We would like to thank Andrea Merchak for taking the time to answer our questions, but more importantly for her contribution to horror!

What’s Streaming this December on Shudder?