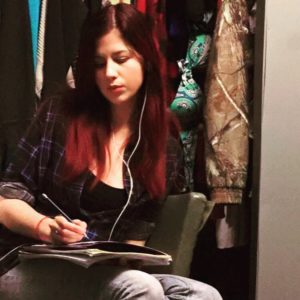 -Tapanga: I don’t think that there was ever a time that I wasn’t a fan of horror or scary things. Growing up my mum was a horror fan and would read Stephen King and Dean Koontz books, she was also an avid horror movie watcher, she had stacks of books and DVD’s and still does to this day. I would always look at the covers and try to think of what the book or movie was going to be about. She would also play video games with somewhat scary content, I remember there was one in particular that I wasn’t allowed to watch her play, so obviously my love of being freaked out that as well as me being somewhat rebellious. I would sneak to the living room and hide just so I could see what was so scary and also to test what I was and wasn’t afraid of.

Just as well growing up I loved having movie nights with my mother, I always went to the horror section of the video store and begged her to let me pick one. She rarely said no her only thing was that she disliked me watching the smut parts, and let’s be honest most movies then were pretty heavy on the sex. So I believe that through her I was passed down the love of horror.

-Tapanga: I think the whole process was fairly organic, I had always loved horror movies and I remember one movie that I was scared of and I couldn’t sleep for days and my mum sat me down and put in the DVD which had some of the the behind the scenes footage of how they made the monster move the way it did, and how it was just a person doing everything. It was around that time that I thought how amazing it would be to scare people. So I think that was the VERY first moment I considered it as a job. However it wasn’t until years later that I actually started working towards being a filmmaker.

-Tapanga: Women in horror month to me, is such an amazing thing because it has helped so many people that may have been at an unfair disadvantage due to what’s between their legs. It’s such an empowering time of the year where women can explore the genre and gain friends and notoriety. I know that the first time I ever participated in it I was in awe of the kindness it brought out in people, whom all shared a common interest.

-Tapanga: Oh gosh I’m going to have to say two, because without a doubt will have to say Sylvia & Jen Soska. I fell in love with their work before I ever even thought to look them up, I believe it was around two years ago after I started seriously considering filmmaking that I decided to pester them on twitter for tips and things. Immediately I was taken aback by how enthusiastic they were to answer any questions I had about starting out. I had watched and read every interview heard every podcast because I was and still to an extent infatuated them and the messages they send out into the world. I was blessed to have them believe so much that they allowed me to be on their WIHM blood drive set and kind of in a general sense mentor me on the rough labyrinth that is the film industry. I could never thank them enough.

-Tapanga: I think we are seeing a giant movement of women not taking any shit. I’m noticing it is really starting to show in the films because before a woman (for the most part)was just in the movie to essentially a blow up doll to be killed.

Now we are starting to see actual character development in females and stronger roles in general. We now have strong female killers attacking guys, we are having a final girl that actually stayed alive because of her own strength and never had to rely on a male to save her.

-Tapanga: If we keep fighting and working towards a more inclusive genre and helping to promote indie artists I think that it could become the safest most amazing place for females just starting out to kind of find their voice and a supporting group of people to sort of rely on.

-Tapanga: I am currently working on a short film called “Angel Lust” that I will be submitting to festivals and local screenings within the next few months.

I also have some shirts, hoodies, and stickers with my name and specialty art on that I will be posting teasers and having them for sale very soon, to help save and cover costs for my film school tuition fees. So if anyone is interested shoot me an email: Tapmccabe.6@Gmail.com
Or follow me on
Twitter: @MortalTemptress
Fb: Tapanga Mccabe

We would like to thank Tapanga McCabe for taking the time to answer our questions, but more importantly for her contribution to horror!