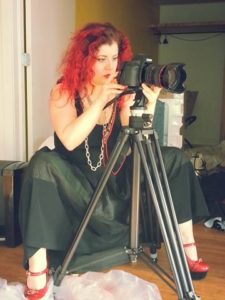 -Maude: For as long as I can remember, I’ve been drawn to creepy and macabre things. Even as a kid, I liked everything spooky and Halloween-y. One day, when I was around 7 or 8, I saw Poltergeist 3 on TV and I was instantly hooked! From that point on, I started exploring the horror section of my local video store and, by the time I reach my teens, I was a full blown horror fan.

-Maude: The desire to be a filmmaker has always been there and I started making short films when I was very young. However, funny enough, I think I tried my hand at every other genre before making my first horror film! I think there was something intimidating about the genre because I was such a fan. Of course, when I did finally embrace horror, that’s when things clicked for me filmmaking-wise and my filmmaking career started picking up!

-Maude: To me the Women in Horror month is an important celebration that helps give visibility to women working within the genre while also promoting their work and inspiring younger generations of filmmakers to follow this career path. Often, women working within the genre don’t have the means or resources to get their films seen and they certainly don’t have access to the same level of publicity bigger productions have, so I feel the Women in Horror month plays a crucial work in helping their career by making it easier to find women-directed horror films.

-Maude: There are so many, it’s hard to name just one! But I gotta say Maila Nurmi (a.k.a. Vampira) is one of the first ones that comes to mind! She’s such an iconic figure and reading about her is fascinating, especially how she fully embraced the character she created and continued dressing as Vampira even in real life. She created a real icon of horror entertainment and was the first one to show that women could be more than starlets/actresses, that there was an alternative place for women within the genre… She also was known as a ruthless contract negotiator and stood up to the studios, which took a lot of balls in the mid-50s!

-Maude: Yes, I feel women take a more active role nowadays through scriptwriting and directing, which is a great thing for the genre because it proposes a different perspective. Every storyteller has its own unique point of view, so the more women see films with female-centric stories, the more they feel like they can also tell their own stories. As a result, more and more women decide to take a more active creative role and present their own unique point of view through their work, which ends up injecting a breath of fresh air in the genre.

-Maude: I feel like the movement is gonna continue to grow and more and more women will pick up cameras and become directors in order to share their vision with the world. Also, I really hope we’ll get to see more women take on bigger projects and have access to bigger budgets and more visibility… I feel there’s a genuine interest and desire for women-directed horror films because the type of storytelling is very different. Now, all we need is for the film industry to take more concrete steps toward gender equality and to actually take chances on more women filmmakers, which is an industry-wide problem if you ask me and is not limited to horror!

-Maude: I just made a short film for the Soska sisters’ WiH Massive Blood Drive PSA. My segment this year is a bit different from the rest of my work as it’s a mockumentary as opposed to a more straightforward horror film. You can check it out here: https://www.youtube.com/watch?v=3gznzs1F2tk&feature=youtu.be

Also, my debut feature At The Door (originally titled Dys-) will be coming out on DVD/BluRay later this year. I don’t have an official release date yet, but if you check my Twitter, I’ll post the info as soon as I have it: https://twitter.com/MsMaudeMichaud

And you can also check out some of my previous shorts on my website: http://www.quirkfilms.ca/films.php

We would like to thank Maude Michaud for taking the time to answer our questions, but more importantly for her contribution to horror!