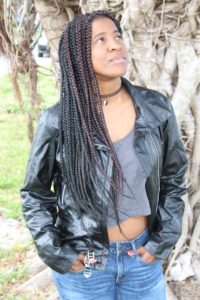 -Tabitha: At the age of five when I first saw Maniac Cop starring Bruce Campbell. Although I was scared, I fell in love with the genre from then on.

-Tabitha: It happened naturally. Although I loved watching scary movies, reading scary books, and writing in general, I didn’t start writing horror until I was sixteen when writing other genres didn’t seem to work for me. Growing up in South Florida, I always loved the idea of being and doing something different, and horror just happened to be the right fit.

-Tabitha: For me it gives us women a platform to show our contributions to the horror genre, something that has been either overlooked or overshadowed I believe mainly because of our looks but has become a lot more popular recently despite horror being a male dominated genre. It is also black history month, so being a black woman writing horror myself makes it more meaningful to me when changing the game of horror fiction. I also am extremely happy that through Women in Horror month, I’ve met some amazing women who have made amazing contributions to horror.

-Tabitha: I have several. Pheare Alexander, Anne Rice, Toni Morrison, Sumiko Saulson, and Linda D. Addison, who is the first and only black person and woman in history to win the Bram Stoker Award for her horror/dark fiction. She broke gender and racial barriers when she won that award and made me very inspired to not only continue writing, but to have hope that I could be the second black female to win the Bram Stoker award 😊.

-Tabitha: Our role has changed drastically. We’ve become more risk-taking, bold, and stronger. During the 70’s and 80’s, horror films like Zombi/Zombi2 had women take more of a submissive role by relying on men to save them and not making the wisest decisions. But with films like 2005’s The Descent, women were in charge, a lot wiser, and definitely stronger. Behind the scenes, we weren’t taken as seriously at first but with Jennifer Kent and Ana Lily Amirpour’s films The Babadook and A Girl Walks Alone At Night, women in horror is making a bigger presence and becoming more popular.

-Tabitha: I can see a future where women have more of a prominent role and not be judged solely on our looks. That may take a while unfortunately but with having a strong community like WIHM where women are stepping out and breaking glass ceilings by doing awesome films or stories, the future will be nothing short of amazing. It would be so bright people would have to keep some shades nearby.

-Tabitha: I recently released two stories titled ‘Black Veil’, which is available for free at www.SirensCallPublications.com under their 37th issue and 6th Annual Women In Horror Month edition, and ‘Alternative™’, about a new birth control pill that is being sold but has disastrous side effects available now on Amazon Kindle and paperback. I have to say I’m extremely humbled and proud to be a part of an amazing project that highlights black women who write horror, a topic that is seriously overlooked, and even the great Anne Rice approved and gave us an amazing shout out! 😊 I’m currently working on a story titled ‘Eat Fresh’ which is about a militant, deranged vegan who is tired of being mocked by family and friends for having a healthy lifestyle and decides to make and serve homemade pizzas, ethics aside. Unfortunately, there’s a hidden agenda behind the pizza and source of ingredients are sinister.

Thank you so much for having me!

And we would like to thank Tabitha Thompson for taking the time to answer our questions, but more importantly for her contribution to horror!