With their debut EP, The Path To Oblivion, Goreworm prove, once again, why Canada reigns supreme in the world of inhuman sounds. The six songs on offer showcase a band not content with just brutalizing. The songs move through various micro-genres with ease – blending death metal with slam and blackened death, with a hint of tech-deth and melodic death thrown in for good measure. Simply put, a ferociously enjoyable listen from start to finish – one that should not go unnoticed.

The era of the Worm has only just begun…

Check out the track ‘Final Nightmare’ below!

‘The Path to Oblivion’ is set to release March 23rd 2018 Via CDN Records.
PRE ORDER: HERE

Goreworm. Sounds like some seriously fucked up shit. Think massive worms – the size of skyscrapers – that worm their way underneath cities, emerging to inflict heaps of gore upon humanity. No one is spared from the worm’s ravenous appetite for human flesh… not your sons, daughters, grandmas or grandpas. The worm devours all. Everything. Does it get much better than that? In fact, it does. Enter the soundtrack to the above-described awesomeness. A soundtrack filled with brutally crafted death metal courtesy of Goreworm. 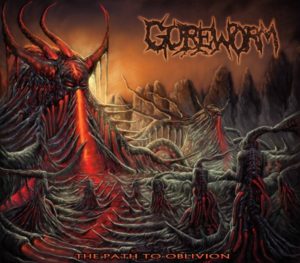 TRACKLISTING:
1. Rest in Piss
2. Wombraider
3. Beneath the Plastic
4. Final Nightmare
5. Family Matters
6. The Path to Oblivion

“Ten Minutes to Midnight” Gets Physical in North American Release

Official Poster and Trailer for 2067 – In Theaters, on Demand and Digital October 2nd