But Deliver Us From Evil
“Hell Hath No Fury Like a Woman Scorned!” 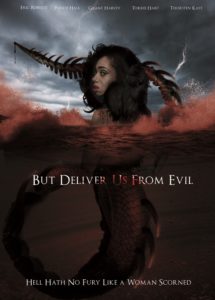 Indican Pictures will release Joshua Coates’ But Deliver Us from Evil, this March. The film is a 20/20 Visions Entertainment production. In the film, Lilith returns to the world. After being thrown out of the Garden of Eden, she looks to take revenge on God, by killing his followers. No one is safe in this exciting thriller. But Deliver Us from Evil stars: Eric Roberts (The Expendables), Grant Harvey (Thumper), Alice Rose and many more. A Digital release, for the film, is coming later this month!

The recently released trailer focuses on a female serial killer. Set in Atlanta, the victims are mostly religious leaders. But, this is no ordinary killer. Possibly a demon, this nightstalker hides in the shadows, targeting those in the religious community.

But Deliver Us From Evil [OFFICIAL TRAILER] (2017) from Indican Pictures on Vimeo.

The film’s official synopsis: Lilith, Adam’s first wife according to Jewish mysticism, seeks revenge against all of God’s creation. God expelled Lilith from the Garden of Eden because of her refusal to obey Adam, the man. Scorned, she returns present day with a vengeance against man and his offspring.

Official Teaser Trailer for “The Nun”

One thought on “A Succubus Steals the Souls of Atlanta in Horror Thriller But Deliver Us from Evil: Out March 20th”