‘Gore’ and ‘Space’. The last time these two words were haphazardly tossed into an artistic meat-grinder, out popped Ridley Scott’s masterpiece of sci-fi horror, Alien. This now-classic flick set a new standard for cinema; a standard that has yet to be surpassed (apart from 1982’s The Thing, of course).

If there were a musical equivalent to Alien (not including the iconic, avant-garde score to the film, composed by Jerry Goldsmith) this honor would definitely be bestowed upon the USofA’s NECROEXOPHILIA. Formed back in 2014, the band dropped their debut album ‘Frantic Visions Of A Xenogod’, an album that immediately cemented their place within the space-themed sector of slam.

In just over four years, the guys have traveled the furthest any slam band has ever ventured into the cold, black recesses of space. In that time, they’ve created perhaps the most brutal ode to the megacosmos that has ever – or ever will – exist, sealed and delivered in the form of new album ‘Intergalactic Armageddon’.

The Xenomorph Queen demands brutality, and brutality she shall receive. Long live the Queen.

Check out the track ‘Hyperspace Homicide’ down below, which was premiered on SLAM WORLDWIDE last week. 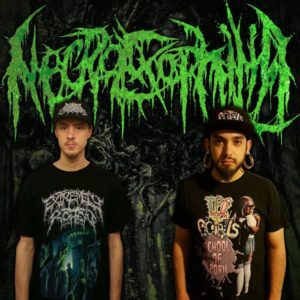