Angry Mule Productions hopes to raise $35,000 to produce Killer Piñata 2: More of Them, a sequel to the cult hit horror-comedy, Killer Piñata. 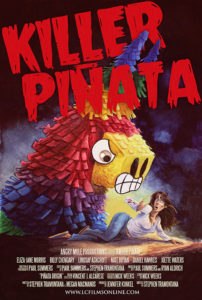 On April 23rd, Killer Piñata 2: More of Them launched on crowdfunding site Kickstarter. Killer Piñata 2 is the sequel to the cult hit 2016 horror-comedy, Killer Piñata. In addition to more laughs and gore, the production is joined by Ron Jeremy and Danny Hassel (of Nightmare on Elm Street 4 and 5 fame).

In 2015, having exhausted low-budget horror streaming options online, three friends decided to produce their own micro-budget film. The result was the bizarre horror-comedy Killer Piñata. Shot on a budget of $3,000, Killer Piñata improbably found its way into the hearts of horror fans and Angry Mule decided the time was right to mount the continuation.

This time, the production is joined by Danny Hassel, who played Dan Jordan in Nightmare on Elm Street installments 4 and 5, and Ron Jeremy, who will play the voice and human persona of the Killer Piñata.

Co-Writer/Director Stephen Tramontana explains, “To our surprise and delight, Killer Piñata has found an enthusiastic audience in the horror community. We always wanted to make these silly movies a trilogy, with the second installment being the largest of the three. Everyone has seen what a $3,000 Killer Piñata movie looks like and we want to improve on that. We’re beyond thrilled that Ron and Danny are joining us for this round of ridiculousness, as well as many members of our crew from Eyelash, who will give our effects and visuals a boost. Even though our production value will be higher, the goofy heart of Killer Piñata will remain the same.”

The Killer Piñata 2: More of Them campaign will run for 30 days. If successful, production will commence in and around Chicago this summer.