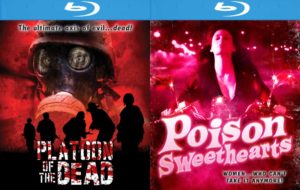 Tempe Digital announces a pair of new additions to its Blu-ray line with the release of “Platoon of the Dead” and “Poison Sweethearts” on May 15, 2018. Each title is priced at $24.99 SRP and includes all bonus material from the original DVD releases, as well as optional English subtitles.

Platoon of the Dead (2009)
In the distant future, man’s greatest enemy is one another as the flesh-eating undead wages war against the living! A Marine platoon is ambushed during a mission, leaving only three soldiers alive to fend off the growing army of the living dead. En route to their pickup point, they come across an abandoned house with three mysterious women hiding out inside. If they can make it through the night, they’re home free…or so they think, because someone is hiding a dark secret that may alter the course of this gore-drenched war…

Poison Sweethearts (2008)
On the depraved streets of Cleveland, young women are dealt hard lives. Trudging through days of filth, poverty and crime, they do what they can to survive. Women backed against a wall — mistreated and abused — now, see them strike back with horrifying vengeance! A beautiful dame forced to sell her body for her pimp. A sweet 16-year-old girl starved for affection who turns to a pair of smooth-talking breakdancers she meets in the park. The kitten who sacrifices her freedom to care for her drunken, degenerate father. Witness these blood-soaked stories and more in a cautionary tale of what happens when innocent women are pushed too far!

Both Blu-ray titles are now in stock from the Tempe Online Store and available for preorder from Amazon, Best Buy, Barnes & Noble, and other retailers through our distribution partners at Allied Vaughn.

“Jakob’s Wife” to Premiere Exclusively on Shudder on August 19th!