Crowdfunded films are rarely newsworthy these days, particularly before they get financed. Then along comes a giant, mutant penguin…

GRIZZLED! is the brainchild of author/filmmaker Rycke Foreman, and a spoof of the monster-run-amok genre. This independent project is on a unique path to production. 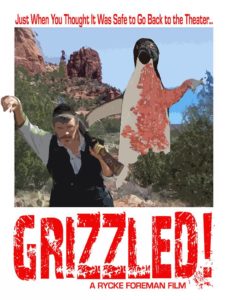 Tired of shady producers, Hollywood hoops and false starts, Foreman has taken matters into his own hands, devising a plan that targets the film’s audience for both crowdfunding and later viewership, yet fits into an indie-producer’s limited budget. It also has the potential to generate social media buzz as this bird takes flight.

Foreman began contacting YouTube channels that focus on horror, comedy and B-movies earlier this year, offering them a producer credit in exchange for targeted publicity. Currently, there are well over a dozen channels on board. These producers are located in the U.S., Canada, the U.K. and Australia, giving GRIZZLED! a worldwide reach.

In the film, three forest rangers and a grizzled hunter play cat and mouse with a giant mutant penguin, all while trying to rescue the President’s missing daughter on the 4th of July. GRIZZLED! will star Alison Arngrim, Jamie Bernadette, Victoria De Mare, Dawna Lee Heising, Maria Olsen, Shawn Phillips, and Emmy Award-winner Bill Oberst, Jr. It will attempt to return to a “classic spoof” format, more similar in tone to Airplane! or Spaceballs than Meet the Spartans.

Crowdfunding will begin in early May. Filming is scheduled to take place in August, with a tentative release in January of 2019. Foreman is also polishing the final draft of the GRIZZLED! novel, which will be released later this year.

Rycke Foreman has been a semi-pro author, actor and filmmaker since the early ‘90s. He is probably best known as editor and co-publisher of 69 Flavors of Paranoia, a horror ‘zine that was produced on and off between 1996–2014. Portraits in Bloodlines, a collection of published and unpublished short horror stories written by Foreman or his son dDamian [correct spelling], released on April 20th.