Surreal Coming-of-Age Horror Story
Stephen Stromp describes his latest novel, Where the Cats Will Not Follow, as a “coming-of-age horror novel.” The book is a strange journey into the mind of a troubled young man who may be delusional—or may in fact possess the extraordinary abilities he was believed to once hold.

“Beyond the surrealism and nightmarish qualities, I see it as an exploration of unhealthy relationships. At its core, it’s an emotional coming-of-age story filled with manipulation, angst, and gut-wrenching self-discovery. I wanted to capture the emotions of someone resisting the transition into adulthood so vehemently, so keen on staying in the past and attempting to relive it, that he is practically kicking and screaming against growing up.” 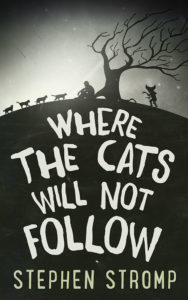 Critics: A Genre-Bending Novel That Bleeds Nightmares into Reality
“An utterly original work. A book that loves to play games with the reader’s mind. Does Ayden actually possess the ability to dream the future, or is his older brother, Everett, just a master of manipulation? Deciding for yourself what’s really going down is one of the book’s great joys.” -Dread Central

“Where the Cats Will Not Follow is a beautiful example of a novel that refuses to live within the confines of one genre and is all the better for it. It’s a quality fusion of fantasy, horror and surrealism with the continual bleeding of a nightmarish dream-world into reality. Prepare for a unique coming of age tale. Highly recommended.” -HorrorTalk.com

“Stromp forces himself to push these characters as far as they can go. Where the Cats Will Not Follow goes to some dark places and shouldn’t be picked up lightly, but will ensnare readers with remarkable dreamscapes. Highly recommended.” -That’s Not Current

About Where the Cats Will Not Follow
The novel follows the life of angst-ridden young man, Ayden. Ayden finds himself held captive by his former friend, Phillip. Phillip believes Ayden holds the key to finding Ginger, his missing girlfriend.

This shocking claim forces Ayden to revisit the adolescent world he shared with his older brother, Everett. It is a world where truth is uncertain and dreams and imagination blur with reality. Everett insists Ayden possesses powers of clairvoyance and has the ability to conjure entities from his imagination. As Everett pushes Ayden into increasingly darker territories, events turn deadly.

Digging into this murky past, Ayden and Phillip awaken old demons they must face as they race to find Ginger.

Amazon Exclusive
Where the Cats Will Not Follow is now available exclusively via Amazon in Kindle and paperback.

The 20th Annual Shriekfest Announces its CALL FOR ENTRIES!