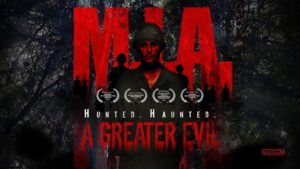 Multicom Entertainment presents M.I.A. A GREATER EVIL, a mysterious thriller revolving around the haunting past of the Vietnam War that deals with highly emotional and disturbing issues that have seemingly been swept under the rug. Directed by Abishek J. Baja and written by Peter Alan Lloyd, the horror film follows a group of American college students in search of gold in a Vietnamese jungle, when their quest goes awry.

Multicom releases M.I.A. A GREATER EVIL on Tuesday, May 8th 2018. The film will be release on DVD and all digital platforms including Amazon, iTunes, Google Play and various other platforms, as well as all cable and satellite providers.

Synopsis: A group of American college students embark on an expedition in search of gold throughout the war-torn jungles of Vietnam. Their dreams quickly unravel when an unintended detour leaves the group lost and wandering where many before them have curiously disappeared. A terrifying encounter at night makes them realize that they are not alone. Tensions brew, as echoes of the Vietnam War follow them through the battle- ravaged jungle. Will they find an escape or become the next victims of a savage and grisly war?

ABOUT MULTICOM ENTERTAINMENT GROUP
Multicom Entertainment Group is an independent distribution company with a focus on the worldwide television market, digital media platforms, publishing, licensing and merchandising. Multicom’s extensive content library of feature films and series includes thousands of hours of content that spans all genres. Multicom has established itself as an industry leader in content distribution, cultivating strong relationships with partners worldwide, delivering content wherever, whenever and however consumed. From Leonardo DiCaprio to Reese Witherspoon, Jared Leto to The Beatles, and with countless acclaimed classic television series and current theatrical films, Multicom’s expansive catalog boasts a powerful portfolio of global superstars across every format and genre.

AMC Joins Forces with Anerke for Exclusive Theatrical on “2050”