Darkness Comes is now available to stream and buy on Amazon

What was your first time like? For Eddie (Owen Whitelaw) it’s going to be the most memorable night of his life. Waking up to find himself tied to the bed of the mysterious Suze (Kelly Wenham) may have been a fantasy, but torture and being initiated into an ancient cult has now become his nightmare. A nightmare which will change the course of Eddie’s life, and all those he meets.

Made in under two weeks, and on a meagre budget, Darkness Comes is packed full of twists, turns, terror and darkly beautiful cinematography, exposing the myth that you need millions to make a great movie. Darkness Comes shows that talent, attitude and exciting ideas is what really matters in modern independent horror. 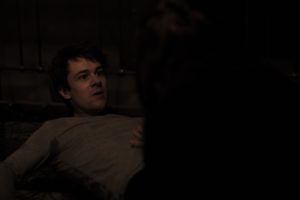 Director, David Newbigging:
“We’ve created a unique and fresh horror in a scene that sometimes feels full of remakes, sequels and re-hashing. We set out from the start to push our budget as far as we could and we’ve come up with something mysterious, scary and really different. We pulled together a fantastic cast that brings so much to the project. I’m really excited to finally show this film to the world.”

Current Tartan Features include Ribbons starring Shauna Macdonald; Sight and Sound’s Best of 2015 punk rock doc, Big Gold Dream; and Where Do We Go From Here? – debut feature of Anna and the Apocalypse director John McPhail.

Official Trailer for SACRILEGE – Releasing March 16 in US and Canada