Awakening from a fourteen-year slumber – like leviathans roused from hibernation by an insatiable thirst for brutality – Canada’s legendary BLOOD OF CHRIST are set to once again unleash a ferocity not heard since CRYPTOPSY’s seminal ‘None So Vile’.

Adhering to the inhuman fundamentals of mid-90’s Canadian death metal/Northern Hyperblast, BLOOD OF CHRIST have conceived an album that pushes the limits of both epochal and contemporary death metal. In other words, the band’s forthcoming album, Unrelenting Declivity Of Anguish, is as much a nod to brutal, old-school death metal as it is any top-tier, cutting-edge death metal band of our current age.

To hammer home this point, the guys have dropped a brand new song, ‘Obese Legions: Fed To The Ravenous Wolves’, in the form a lyric video – a song that is sure to bludgeon your fucking skull into dust. Guitarist and original founding member, Jeff Longo, had this to say regarding the song’s message…

“Today, we are proud to present you with the next single “Obese Legions: Fed to The Ravenous Wolves”, from our new album. A catchy and bludgeoning song that is a direct attack on the upper 1% of spoiled brats in our society, their greedy corporations, and how we are all slaves to the corrupt system. It is our hope that you feel rage whilst spinning this new track… rise up against the obese legions!”

Watch the Lyric Video for ‘Obese Legions: Fed To The Ravenous Wolves’ below! 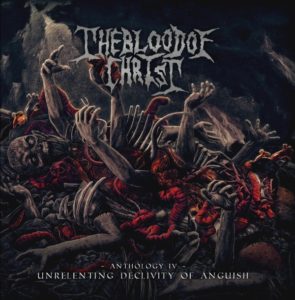 TRACKLISTING:
1. Bane of Pestilence
2. Echoes From the 7th Dimension
3. Dragooned by Jupiter
4. Obese Legions: Fed to The Ravenous Wolves
5. Iron River… Conquer the Wilderness
6. The Cursed
7. Unrelenting Declivity of Anguish