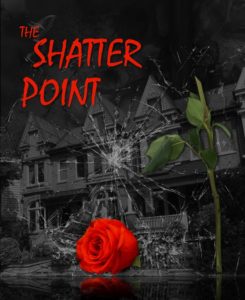 Everyone has a breaking point. So begins Jon O’Bergh’s novel The Shatter Point, an intriguing study of contemporary society wrapped inside a ghost story wrapped inside a thriller. The novel confronts Internet celebrity, social media culture, and extreme thrills. But it also explores timeless issues of love, loss, and the ways in which we are haunted by our pasts. Weaving layers of truth and fiction, the story challenges our sense of reality with unexpected twists and turns.

Set in Southern California’s Orange County and historic Pasadena, the plot follows two parallel sets of characters whose lives eventually intersect. Jada Mercer is used to getting her way, and loves danger. She pressures her boyfriend Asher Williams, a musician in a band, to prove himself through the rigors of an extreme haunt known as Horror Place. At the same time, the haunt’s owners, Phil and Donna Woods, are locked in an escalating feud with neighbor Ruth Littleton. The past intrudes in unwelcome ways for each character. Donna remains perplexed about a previous marriage that turned sour when the husband became abusive. Her son Billy fears that he inherited his father’s propensity toward violence. Feelings of inadequacy haunt Asher from his years being bullied. Ruth hides a series of traumatic incidents from her youth. Jada’s craving for stimulation leads eventually to disaster. The terrifying consequences unfold step by step as the characters are pushed beyond the shatter point.

O’Bergh, who grew up in Orange County, wrote the book after watching a documentary about extreme haunts. “It’s much more than just a ghost story,” he explains. “It’s really a study of people under stress. The story also plays with the challenge of distinguishing what is real from what is fake. I don’t want to give anything away, but the curious reader will discover different layers of reality versus fiction within the book.”

The novel received a five-star rating from Reader’s Favorite, which called O’Bergh “a master of suspense.” The story seems perfectly suited for our era of fake news. In a world where reality is manufactured for popular consumption, how do we know what is real and what is fake, what is true and what is imagined? The story reveals that, when the shatter point is reached, the horror becomes all too real.

The Shatter Point is available both in print and digital versions from major book distributers, including Amazon, Barnes & Noble, Powell’s, and iBooks. The ebook version was released for all platforms on April 17, 2018. The print version will be released on May 20, 2018, and is currently available for pre-order at Amazon. Photos and additional information are available upon request.

Jon O’Bergh is an author and musician who loves a good scare. He was born in California and grew up in Orange County, where he received a Bachelor of Arts in Music from the University of California at Irvine. He has written two groundbreaking books which link music and stories: Song of Fire and A Book of Hauntings. He has released over a dozen albums in a variety of styles, including the atmospheric album Ghost Story. After many years living in San Francisco and Washington, D.C., he now spends most of his time in Toronto.

Shriekfest Will Screen the LA PREMIERE of CHIMERA!