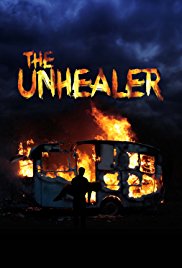 Principal photography has begun on a new independent film combining the genres of drama, science fiction and horror, featuring a cast of young Hollywood and Arizona actors led by a trio of veteran film and television stars; Natasha Henstridge (Species, The Whole Nine Yards), Lance Henriksen (The Terminator, Aliens) and Adam Beach (Suicide Squad, Flags of Our Fathers). The players depicting high schoolers, who just might not make it to their senior year, are Elijah Nelson (Crazy Ex-Girlfriend, The Thundermans), Kayla Carlson (CSI: NY, Secrets of the Mountain), David Gridley (The Last Ship, Guidance), Angeline Appel (The Ranch, The Fosters), Will Ropp (Speechless, The Dejects) and Gavin Casalegno (The Vampire Diaries).

The story of The Unhealer begins when an ancient Native American burial site is desecrated and robbed, unleashing otherworldly effects. A sickly and disturbed local boy becomes instantly healthy while rapidly gaining alarming supernatural powers. But when he uses those powers to enact murderous revenge on the teens who bully him, the unnerving, bloody horrors begin and won’t end until he surrenders his powers or his life.

The moral and social underpinnings of the film’s narrative expose not only the most common and egregious examples of teen bullying but also take a deep dive into unchecked emotional demons unleashed by abuse of a power and driven by raw vengeance – producing gruesome events with shocking supernatural surprises.

The Unhealer’s production team is a blend of experience and talent drawn from Hollywood and Phoenix. The majority of the film is being shot on locations in the general area of Chandler, Arizona.

Award-winning film director Martin Guigui is at the helm of The UnHealer. He most recently directed and co-wrote the action-drama Nine Eleven starring Charlie Sheen, Whoopi Goldberg, Gina Gershon and Luis Guzman depicting individuals trapped in an elevator in the World Trade Center on Sept. 11, 2001. Guigui wrote his first feature film, My X-Girlfriend’s Wedding Reception (1999) which won critical acclaim on the Festival circuit and launched his career as a writer/director.

As one of several producers of The Unhealer, Cristi Harris is Phoenix-based and a co-founder of Shared Card Films, also in Phoenix. She said, ”It was a big team effort that brought this film to Arizona. We look at this project as laying the groundwork for re-energizing the state’s film business. The Unhealer’s above-and-below the line talent are proving to be a terrific working blend of great professionals from two great film markets, Los Angeles and Phoenix,” Ms. Harris concluded.

Producer, Natasha Henstridge, while prominently known for her acting skills is also an adept film producer, having served as executive producer of The Christmas Switch and the co-producer of Home Invasion. She also starred in both movies.

Producer Galen Walker, who has worked in the industry for over 25 years, has produced film and television content for the major studios and is currently producing a $25 million CGI/Hybrid animated feature Once Upon a Zodiac with Paramount Studios and Unicorn Studios in Hong Kong and Picture Fish Studios in the U.S. Recently, Walker produced a thriller//horror film, Dead Awake created by Jeffrey Reddick, the creator of the successful franchise, Final Destination.

Producer Tony Hannagan has spent the majority of his life in various aspects of the entertainment industry, with experience ranging from casting to acting to film production and talent representation. He produced the award winning film Sinners, further confirming his ambition to put quality projects out into the market place.

Co-Producers are Larry Mclean and Corbin Timbrook. Mclean most recently directed the feature film Vanished: Left Behind Next Generation and will soon begin directing the second unit of the new star Trek Discovery series. Timbrook is a multi-award winning filmmaker who has worked with the legendary Roger Corman and endorsed by Tobe Hooper. Timbrook’s critically acclaimed film Escape Room is out as a Red Box premiere and in theaters in June, 2018. Do You See Me? screened at the Cannes Film Festival, 2018 and due out in theaters in the Fall.

Associate Producers are Denny Schnulo and Jessica Lion. Schnulo is also in the development of the production services company called Arizona Filmrise, creating opportunities to help grow the Arizona film business, partnered with Cristi Harris and Jessica Lion. Jessica Lion’s career in public relations and marketing began when she was asked to join the Briggs 4 Kidz Foundation, a non-profit founded by Chicago Bears Linebacker, Lance Briggs. Lion was later introduced to the film industry as a PR and Marketing Coordinator when she joined Sun Studios of Arizona. She is the CEO / Founder of Lion MediaMarketing and the co-founder of Arizona Filmrise, the production services company which focuses on the growth of film projects within the state of Arizona.

The producers want to especially thank the Chambers of Commerce of Chandler and Apache Junction, AZ for their tremendous support for the film and the exceptional choices of locations.

New Trailer for Thriller CONFESSION in Theaters and On Demand this January!