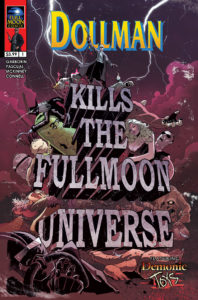 From the fevered mind of producer Charles Band comes Full Moon Comix, a new imprint dedicated to depicting the entire Full Moon Universe as you’ve never seen it before, realized by some of todays top comic book writers and artists!

Dollman Kills the Full Moon Universe sees the dimunitive alien supercop (played by Tim Thomerson in the cult classic Albery Pyun-directed original 1991 film) on a bloodthirsty quest to wipe out the myriad monsters, marionettes, madmen and mutants from some of Full Moon’s most beloved movies. But why is he doing this? Is there a method to his madness? And will Dollman’s actions have reprcussions even more shocking than even he could imagine?

Full Moon Comix presents Dollman Kills the Full Moon Universe will have its EXCLUSIVE premiere at the 2018 San Diego Comic Con, with Tim Thomerson himself on board to sign books and meet the fans.