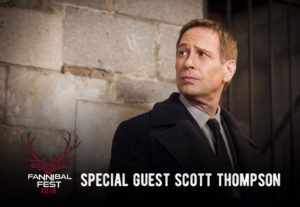 Most recently, Thompson embarked on a tour to celebrate the 20th anniversary reissue of his book Buddy Babylon, which is based on “Buddy Cole,” the character he created on The Kids in the Hall. He also just released his very first comedy album, Not A Fan.

Although Hannibal has been off the air for three years, Thompson says he misses the on-set camaraderie: “Being on a show with a group of people you enjoy, it’s the greatest thing in this business.”*

He’s also a fan of the fandom itself. “For me and Aaron, particularly, it’s fun for us to spread our wings at these conventions… we have good chemistry, and we really enjoy when we’re performing.”

When asked about what he would like to see in a fourth season of Hannibal, Thompson says he’d like to explore Jimmy’s personal life. “I’d love to know a bit more about who he and Brian were outside of the lab.” 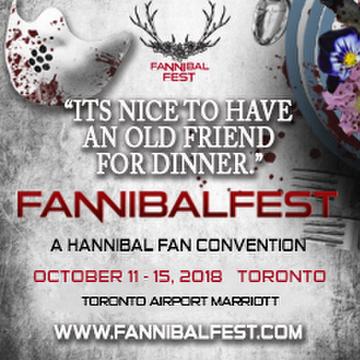 FannibalFest 2018 is an annual Hannibal convention held in North America for fans (“Fannibals”) of the 2013 – 2015 television series created by Bryan Fuller. The convention is managed by a non-profit group comprised of fans of the series.

*From A Conversation with Hannibal’s Scott Thompson, http://thegeekiary.com/hannibal-scott-thompson-interview/47336, The Geekiary, October 20, 2017.