Richard Schertzer is a college student in New York, and up-and-coming filmmaker. He’s already created two films that have had a lot of success at film festivals. To our surprise, they are part of a shared cinematic universe that he’s created. Find out more about Richard, this horror universe he’s created, and his films in our interview below…

-PH: Before we talk about your films, please tell us a little about yourself? How did you get started in filmmaking?

-Richard: The first time I got into filmmaking was back in June 2013 when I made a short film about my pet beagle entitled “A Dog’s Life” and two years later made a similar film about my next dog. After that, I went to Manhattanville College in Purchase, New York and joined their film club, Manhattanville Video Project and first made a music video entitled “A Certain Smile” which was dedicated to my grandparents. After that, I made “The Little Chapel” through a video project in one of my classes. Afterwards, filming for me was non-stop.

-PH: How challenging is it being a college student and a filmmaker? Are there some advantages to being both a student and filmmaker?

-Richard: It’s a lot of work but filmmaking is very therapeutic for me. It helps when filmmaking is apart of my class and it’s pretty fun when things go smoothly and there are some advantages to being both a student and a filmmaker because you have an outlet to be creative in the middle of studies and work and maybe an internship or two.

-PH: Why horror? Have you always been a horror fan, or is this just where you’re filmmaking has taken you?

-Richard: I wanted to do horror after I saw 1973’s “The Exorcist” and was incredibly disappointed. I didn’t want to make a romance because those are standard films and I didn’t know how to write a comedy. Horror was actually a genre that I had no idea I would get interested in, but, looking back, it makes sense that I got into it because I watched a lot of old horror films like “The Picture of Dorian Gray”, “The Hunchback of Notre Dame”, and “The Invisible Man”. 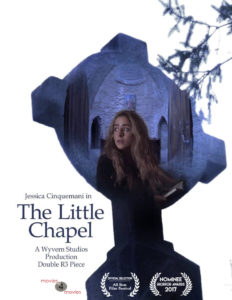 -PH: Your first horror film is “The Little Chapel.” Can you tell us what it’s about?

-Richard: “The Little Chapel” is about a young woman named Stacy who tries to bring back her dead friend but with extreme consequences. I first conceptualized the film in my sophomore year of college for a class. It took me and a small team a couple of days to shoot. Erika Rosell designed the poster and Declan Jones wrote the score.

-PH: Was your first film making experience harder or easier than you thought it would?

-Richard: It was harder than I expected for my first official short film because one day on set I was the only person with all of the equipment in my dorm room and I had to drag all of the lights, camera, and the tripod from my room to the shooting location, and set up all the lights and other equipment myself until the crew came. That was the most frustrating moment in the shooting of the film.

-PH: The film has experienced a lot of success getting into several festivals. How did it feel knowing festival audiences were getting to see your work?

-Richard: It felt amazing, spectacular, and any other synonym you can imagine. This short film was just a runaway success because not only did it make it into multiple film festivals across the globe, it was also the most successful film made at Manhattanville College, the first movie to begin a cinematic universe with more than three films, and brought about the resurgence of horror films following which include “Afrit”, “Death Lay Here”, and “Piano”. All of which have been written, directed, edited and produced by myself. All four of those movies are apart of the shared cinematic universe that I created called the Horror Extended Universe.

-PH: You recently released your second horror film “Afrit.” What’s that about?

-Richard: I’m glad you mentioned that film because “Afrit” was released on May 25th 2018 and it’s about a young woman who is stalked by a mysterious demon with a dark history. In the Horror Extended Universe, “Afrit” takes place about six months before the events of “Death Lay Here”, “The Little Chapel” and “Piano”.

-PH: Where did the idea for the film come from?

-Richard: The idea for “Afrit” came from some stalker-horror movies and the fact that I searched up mythical beings that I wanted to explore in a possible future project. I shot the film during the month of April 2017 and I wanted to explore another element outside of “The Little Chapel”. The cast was last-minute but I still wanted showcase a film. It consisted of Maricruz Isabella Herrera, Judy Gabeskeria, and Sammi Smith. Smith was in my other film “Death Lay Here”. “Afrit” has been a nominee for Best Student Film at the Miami Independent Film Festival and has received attention and a review from The Monkey Bread Tree Film Awards. The link is here: https://www.youtube.com/watch?v=ee7oGOFPof4

-PH: What are the biggest similarities and differences between your two films?

-Richard: Both movies take place in the same Horror Extended Universe Timeline and follow a similar thread of a young woman being preyed upon by a mysterious being and suffering the consequences. However, “The Little Chapel” has received international acclaim and recognition from over forty film festivals. “Afrit” has only been considered in a few. That and there’s less dialogue in “The Little Chapel”. I remember I was getting reviewed by a film festival in Switzerland and they said that “The Little Chapel’s” success lies in its simplicity.

-PH: Talk a little about the cast and crew for this film, and how they helped you bring your vision to life.

-Richard: The cast and crew of “The Little Chapel” was minimal but effective. There were only five people including myself. I just wrote up the script for the group and they decided to go with it. We decided to have Jessica Cinquemani play Stacy, as she was already in the group and we didn’t want to waste time auditioning people. However, we had to cut short a page or two of the script due to time constraints.

“Afrit” was less planned out but was made a lot faster with the same number of people. We had three women in the cast, myself and my sound guy. We got the film completed in one day but turned out to be less successful than “The Little Chapel”. 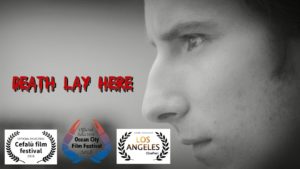 -PH: Here’s your chance to promote anything we haven’t talk about. Let us know something more about your films that wasn’t mentioned, your production company, and/or anything else you would like to mention.

-Richard: The next film in the Horror Extended Universe canon coming out Halloween 2018 is “Death Lay Here”. The film is a sequel to “Afrit” and the prequel to “The Little Chapel” which takes place minutes before “The Little Chapel”. It tells the tale of a man named Charlie Berry who comes across a strange box that unleashes demons. Be on the look out this October because the film has such a twist ending that you probably won’t believe that it happened on screen. The film was made under Wyvern Studios, Expired Media, and Manhattanville Video Project. We filmed in the dorms, library, library stacks, and the pitt in Dammann hall. This particular film was also the first ever film whose trailer has been selected at a festival, which won Best Trailer at Cult Critic Movie Awards in India and was nominated for the Jean Luc Godard award. It was also the first film to have the writer, director, editor, producer and composer be the same person and believe me. It wasn’t an easy task for me.

Likewise, my fourth film “Piano” will be released on all my social media accounts on May 2019. It takes place in between “Death Lay Here” and “The Little Chapel” and is about a young man named Peter Ruderman practicing for his senior recital but to be stalked by a demon in the music building, much like “Afrit” and “The Little Chapel” it follows the same thread. It stars Luke Rottman who was very interested in the part after I pitched it to him and after Manhattanville Video Project refused to produce the film, I took matters into my own hands and was forced to film by myself. It was the first film made at Manhattanville College with just two people and without a tripod, shoulder rig, or stabilizer. My hands were cramping for the entire shoot.

Another film that I made during my tenure at Manhattanville College was entitled “Sweet Dreams” which was a documentary about what the American Dream means in the year 2018. It was the first documentary at Manhattanville College to be written, directed, narrated, shot and edited by the same person and get into a film festival. The link is listed here: https://www.youtube.com/watch?v=6Do6cUylWyA

Another one of my films was entitled “Nature” which was some shots of nature over at my college campus which was featured at the International Ecological Film Festival TO SAVE AND PRESERVE in the Russian Federation. The film was made as an exercise for my filmmaking techniques. The link can be found here: https://www.youtube.com/watch?v=EjR6nydEqDc

My film company Wyvern Studios has been producing all of these films and media in hopes of producing longer bigger-budget and more professional films. My company is small but very ambitious and we are looking to grow to reach a wider fan base. Links are below. Make sure you guys follow me on twitter, like me on facebook and subscribe to my youtube page and keep on dreaming bigger and brighter.

We would like to thank Richard for taking the time to answer our questions. As you can see, he’s worked hard to produce some great short films. Hopefully you’ll check them out, and support him on social media. We look forward to seeing more of the Horror Extended Universe in the future!