Recently we got the honor to share filmmaker David Teixeira’s award winning short horror film “Girls Night” as one of our Sunday Scares features. We really enjoyed and film, and are happy that we got an opportunity to learn more about David and his film. If you haven’t seen his film, this is an excellent opportunity to watch it, and learn more about what he has in store for it in the future…

-PH: Please tell us a little about yourself, and how you ended up being a filmmaker.

-David: I was born in France in 88 and when I was 5 years old I moved to Portugal with my parents and my sister, where I lived most of my childhood and young-adult life. I was always a fan of art since I was little. I mean, since I remember I loved to draw mermaids and watch The Little Mermaid in loop every single day… I had a huge passion with the sea, animals and cinema.

In 2007 I decided to study Filmmaking and I got in the university and after three long years of studying arts, I got my licence degree. After that moment I knew I wanted to explore filmmaking so I tried for a while and even though sometimes it didn’t work as plan, I always got up on my two feet and tried again. Now I can call myself a filmmaker and I know I want to write and direct my own projects and share my vision with the world. The need of creativity is absolute for me.

-PH: You didn’t start your filmmaking career in horror, so why did you decide to make a horror film? Have you always been a horror fan?

-David: I wrote and direct distinct subjects and genres but overall the most prominent was always horror or thriller. I was introduced to the genre by my cousins and my sister and I remember knowing about Freddy Krueger but too afraid to watch it. When I reached my 11 years old I started to watch a lot of horror films including The Exorcist, Scream, I Know What You Did Last Summer. The rush of adrenaline got to me and I wanted to explore that weird world of fantasy and danger. Now I’m a huge fan of horror. I watch everything… Almost every night I watch a horror movie. It’s a weird feeling but I love it. 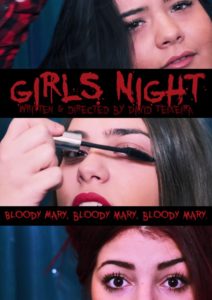 -PH: So “Girls Night” is your first horror film. Tell us a little about it.

-David: “Girls Night” is about three girlfriends having fun on Halloween night. They plan a slumber party and while they talk about boys, drink some wine and dance to some music, someone or something is lurking in the corner, watching them… It’s a low budget horror film made with love for fans of horror for sure!

-PH: Where did you get the idea for the film?

-David: The idea of “Girls Night” came in 2016 when I wanted to direct a horror movie all by myself. After a difficult time in Paris in 2014 where I lost myself and any confidance I had in me, I wanted to believe in myself and prove, mostly to me, that I could do something in the business. I wanted to prove that I was able to share my passion with others and that I had a gift. After some great nights with my cousins and friends in France, we shared some ideas from a script I wrote a while back and everything came to life when I decided to rewrite dialogues and write roles for them. They said yes and they jumped on board. The title “Girls Night” was brainstormed and decided that night. Quite the story, ah!

-PH: The film takes place on Halloween. Is there a certain reason for that?

-David: There was a reason. I wanted to be accurate that the killer had a mask and that he could be outside watching by the window with a mask on because it was Halloween night. I wanted the whole film to have a close-to-reality vibe. That was important.

-PH: Your film stars three women. Tell us a little about your casting for these roles, and the job your eventual stars did in the film.

-David: Three women, yes. Three wonderwomen. Ah! I really wanted to work with women. My next project will be all women only as well. In “Girls Night” they worked a lot with me and for me, for sure. They were supportive even though they had no idea how filmmaking works. They aren’t actresses at all… I just needed them to be natural and I wanted them to have the same passion I had for the characters. They understood my vision very quickly and after a while they got the hang of it and they were open minded, opinionated and excited about the project. It was an intensive experience for them as it was for me. 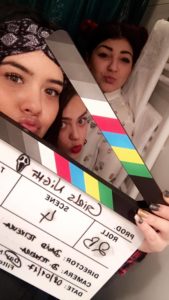 -PH: “Girl Night” has been shown at several festivals, and received a lot of great reviews. How satisfying is that to see especially this being your first horror film?

-David: It’s amazing. I still need to pinch myself a couple of times. I worked on some shorts before and even a TV documentary but nothing compares to the horror community and the indie community I met online. This community is so supportive and super welcoming that I felt that I was in the right place immediately. After that the selections started to happen and I was so excited for that. I still am excited. Every single day. I spend hours and hours to wait notifications on FilmFreeWay. When I read positive reviews online I’m so grateful and so happy that they got the film the way I wanted the audience to get. I didn’t want a horror movie with jump scares, so “Girls Night” isn’t for everyone; but I’m glad it gets bit by bit a little recognition around the world. Means a lot… So much you can’t imagine.

-PH: And that’s not all we’ve seen from “Girl Night.” You’re working on a sequel right now. How’s that going, and when can audiences expect to see that?

-David: YES! “Girls Night 2” is now completed! It’s on film festival circulation right now with its first screening in Derby, UK, this August 4th. The short will come out this Halloween on Youtube, Vimeo and Amazon Prime!

-PH: Is there anything you can tell us about the sequel, or is it a surprise?

-David: It could be a surprise but the synopsis is already online! I can say that it’s darker and heavier than the first… You won’t see the light and the fun side from the first on this one. This one is one year later after the events… And if you’ve watched the first, I think you can imagine the rest… 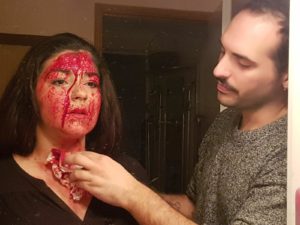 -PH: Here’s your chance to promote anything we haven’t talk about. Let us know something more about your films that wasn’t mentioned, your next project, and/or anything else you would like to mention.

-David: Right now I’m working on my first feature “Lorem Mortuis”. It’s pure slasher mixed with psychological horror. I’m so excited for this. I’m still working on the script right now so I think I won’t be able to start producing it until next year.

We would like to thank David for taking the time to answer our questions, and of course sharing his film with us. Hopefully this convinced you to check out “Girls Night” if you haven’t seen it yet. Please follow David at the links above to stay updated on “Girls Night 2,” and his other future projects!

AIRING ON COMET in January