10 Questions with Jenn Wexler, director of THE RANGER 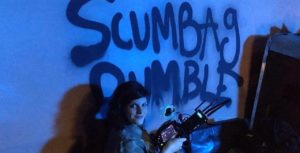 -FrightFest: What is it about the Punk movement you like so much? It informs so much of THE RANGER…

-Jenn: I’m incredibly drawn to punk’s spirit of rebellion and its embracing of individuality. Growing up in the suburbs, there was so much pressure to fit in, to be seen as “normal,” and going to punk shows was thrilling for me because it helped me realize it was okay to want other things. I went to college in Philadelphia at the University of the Arts and studied screenwriting, where my classmate, Giaco, wrote a script that would eventually become THE RANGER. I fell in love with the concept of a group of punks going up against this figure of authority, someone who deems them less than, because they don’t conform to what he values as worthy. I find personality types like this terrifying– ones that say you have to fit into some cookie-cutter mould or else you’re living your life wrong. Punk is all about fighting that.

-FrightFest: You started out at Larry Fessenden’s Glass Eye Pix in the marketing department and moved on to producing. But was it always your ambition to direct?

-Jenn: I’ve always wanted to direct and was directing shorts while working in marketing, but to direct a feature, I wanted to first understand as much as possible about filmmaking. Producing films like DARLING, LIKE ME and MOST BEAUTIFUL ISLAND was invaluable, it taught me so much. When you’re a hands-on producer, you’re in the trenches with directors, helping them realize their visions, weathering the pitfalls and celebrating in the triumphs through every stage of the process.

-FrightFest: THE RANGER is your feature debut so what was important for it to be about and what did you want it to achieve artistically?

-Jenn: I wanted to combine the outrageous, absurd humor of 80s punk movies with the thrill of the slasher, all circling around a girl who’s trying to figure herself out in the face of others telling her who she should be. Throughout the film, Chelsea is trying to unravel memories about her childhood, which informed the bubblegum, candy colored aesthetic — sweet on the outside but getting sour the more her memories are revealed. Overall I wanted the film to have an EC Comics vibe, to feel larger than life, with the world of the punks and the world of the Ranger colliding, both visually and musically. We start the film in the punk club, with all these insane colors, and when the punks escape to the woods they bring those colors with them, invading The Ranger’s rustic, Smokey-the-Bear parkland. 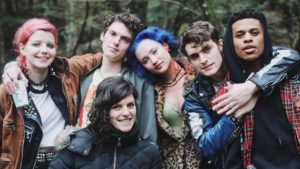 -FrightFest: Should we make something relevant out of SCREAM being the first horror film you ever saw?

-Jenn: I’ve been drawn to scary stuff since I was a kid. I was obsessed with the television show ARE YOU AFRAID OF THE DARK and would try to get my friends to hang out with me in graveyards after school. I was 10 years old when SCREAM came out, and I remember overhearing a conversation between my mom and one of her friends about how utterly horrible this new movie was, my mother completely disturbed by the description of the sweet little girl from ET hanging from a tree with her insides out. My curiosity was more than piqued. At a sleepover party soon after, someone had the VHS. I felt a supreme sense of rebellion watching the movie, knowing how much it would freak out my mom. It became more than rebelling against my parents, though. It was like an entirely new world had been revealed to me. SCREAM ushered me into adolescence, and I became obsessed with the teen horror movies of the time, including THE CRAFT, I KNOW WHAT YOU DID LAST SUMMER, URBAN LEGEND, DISTURBING BEHAVIOR, THE FACULTY, with BUFFY THE VAMPIRE SLAYER my favorite TV show. As with my discovery of punk, they offered me a sense of adventure and an emotional escape from the tedium of being a kid in suburbia. Eventually they gave way to my discovery of the rich history of the genre. I think a lot of what you see when you’re in your early adolescence informs your development as an artist and as a human, and I can say the 90s teen slasher craze informed mine. 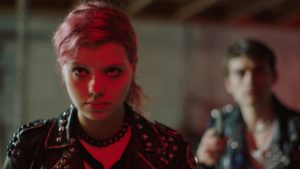 -FrightFest: Why did you choose Chloë Levine as Chelsea and Jeremy Holm as the Ranger?

-Jenn: Jeremy is a friend of co-writer Giaco Furino, so we wrote the part with Jeremy in mind. I was a fan, watching him in HOUSE OF CARDS and MR ROBOT. When at long last we showed him the script, we were very happy to find out that he loved it! We had a meeting and we all clicked. He was the first person we cast.

We worked with casting director Lois Drabkin who suggested, while I was at SXSW 2017, I check out Chloë Levine in THE TRANSFIGURATION. Her performance was mesmerizing, and we ended up having a meeting at the festival. We bonded over the character, and I could tell she would bring so much nuance to the role.

-FrightFest: Does Larry Fessenden always insist being in every production, or does he actually wait to be asked?

-Jenn: Larry is the last person who would ever ask for a role. It’s just all of us filmmakers who love and admire him who keep asking him to be in our movies.

-FrightFest: Did you worry that there’s been quite a few other 80s slasher homages recently?

-Jenn: No, if a concept speaks to me—and THE RANGER is one that wouldn’t let me go—I’ll follow it through. Projects may have similarities on the surface, but when film is being made from a sincere place, each one will be so informed by the specifics of the people who make it.

-FrightFest: You used the term ‘80s Dreamland’ during shooting on the Hunter’s Mountain locations, what did you mean exactly?

-Jenn: As we were prepping for production, a few of the actors and crew members asked what year the film takes place in; the kids have no cell phones and there’s a boombox, so they guessed sometime in the 80s. I expressed that the film doesn’t take place in the actual 80s, but just to the left of reality, in a comic-book, fairy-tale-esque world that I dubbed 80s Dreamland. In my mind’s eye, it was a world where 80s punk movies like RETURN OF THE LIVING DEAD, Smokey-the-Bear PSAs, and Lisa Frank colors collide.

-FrightFest: What was the biggest lesson you learned from your first time behind the horror camera?

-Jenn: Anytime I make a film I feel like someone has drilled a hole into my skull and poured information into it. THE RANGER was exciting because, while I’ve certainly worked across departments before as a producer, it was my first time working with department heads from a creative perspective. Collaborating with our DP, production designer, costume designer, composers, and more to realize the film was such an incredible experience. At the end of the day I learned that directing was just as intense and also just as rewarding as I hoped it would be.

-FrightFest: All that Punk music but Charlie Rich’s 1973 hit ‘The Most Beautiful Girl’ makes the biggest impression. WTF?

-Jenn: I really wanted the music in the movie to feel like a mix-tape. When the punks are in control, the soundtrack is primarily punk music, but as they get deeper into the woods and lose control, The Ranger’s music of choice takes over. Jeremy would use ‘The Most Beautiful Girl’ to get into character, and he was always singing it on set. Our on-set editor, Kyle Mumford, dropped the song into the cut just to see how it would feel, and immediately we were all obsessed! But my personal favorite song on the soundtrack is “The Good The Bad and The Kowalskis” by The Avengers, which plays over the closing credits. I feel The Avengers are Chelsea’s spirit band.

Unlock the Door to ROOM 203 at Your Own Peril, In Select Theaters and on VOD April 15th

13 Minutes of Horror Film Festival has Officially Kicked Off & Our Submissions are Open!