The psychological “coming of age” horror film, written and directed by José Pedro Lopes, marks the distrib’s first theatrical release. The film, which had its world premiere at the Fantasporto Film Festival on February 26, 2017, is scheduled to open in August.

Ricardo and Carolina are complete strangers that meet seemingly by chance in the “Forest of the Lost Souls”, a place where many people go to commit suicide. These two, a young woman and an old man, are no different than the others as they also came to the forest for this very reason.

They decide to briefly postpone killing themselves in order to explore the forest and also to continue talking to one another, as Ricardo and Carolina find themselves intrigued by one another.

However, as the pair go further into the forest it becomes clear that one of them has other reasons for being in the forest and is not who they would have the other believe them to be and is actually a psychopath…

The Forest of the Lost Souls will open theatrically August 3 in L.A and other cities. 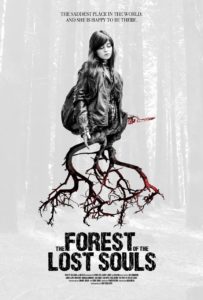 -PH: How long ago did you shoot the film, sir?

-Jose: As “The Forest of Lost Souls” is a small independent film, its shoot actually took a long while. We shot a week in the summer of 2014 (the scenes set in a house) and a week in the winter of 2015 (the scenes set in the forest), then additional days making about another week and a half during 2016, of the beginning and the end and some pick up stuff.
This was to make room for everyone’s schedule, and also we wanted to edit the stuff we shot before film what was going to complete it.

-PH: Was it an idea you came up with?

-Jose: Yes. I wanted to make a coming of age story of a murderer, and also a story about a family that deals with the suicide of a loved one.  Clashing these two stories was something I came up when I was pitching one of them at the Pitching Forum in Espinho (Portugal) back in 2012.

-PH: Did you seek inspiration from some of the stories coming out of today’s headlines?

-Jose: In fact the main “real world” story that influenced “The Forest” was the catastrophe in Haiti. I was very disturbed when I read that (foreign) people were taking advance of the victims, and of the survivors. I was upset of the idea of no matter how bad something is, there’s always someone trying to take advance. So my villain is someone who preys on sadness, and nothing like a Suicide Forest to find it.

-PH: What were your initial plans for it? To sell it to a studio or did you always intend of doing it independently?

-Jose: The portuguese film industry is very very small. Then if we talk about genre films, it is almost non-existent. “Forest” was the first horror feature (or marketed as horror) coming out in over 10 years. That’s how tiny is the horror scene here. So it was a self-made indie film from the start. 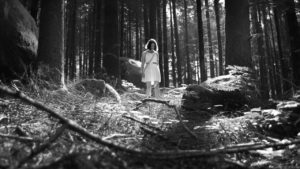 -PH: Any hiccups along the way?

-Jose: A lot of them. Filming in the forest during the winter was hard, and we did a lot of driving to get to some spots. As we shot in a long period of time, I kept changing the ending and the way some stuff played out.

-PH: How did you go about getting distribution?

-Jose: I did everything myself. Festival submission, then getting some distributors and sales to work with. I attended the European Film Market in Berlin with the film, but above all, always kept very alert to any opportunity I could get. I’m very happy with the very “Forest” found audiences around the world.

-PH: Why was Wild Eye Releasing the right home for the film?

-Jose: Yes – Wild Eye Releasing has a great lineup of indie horror films, and cares for them very well. And I was happy to be one of their first ventures in a more artistic driven film. You have to be very open-minded to bet on a portuguese B&W film. Doesn’t get more niche than that.

-PH: What’s the message behind the movie, in your opinion?

-Jose: The movie has a very open ending – and I see people still interpreting it in new ways. I would say (SPOILERS) that Carolina is a spoiled, rich girl, with a bored life. And she loves to quote Virgina Wolf for sure, but she was very into causing distress and pain in the people she met in the forest. But I would say that when we find her in the movie, this is the first time she does home invasion and that’s why she’s so sloppy doing it. In the end, we get that voice over of her inviting more people to the forest – to me it was intended to make it a bit of a farse. How bad (and kind of lame is she) that she puts things in those terms? (END OF SPOILERS)