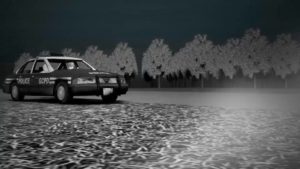 The Legend of Carrico Road will be a slasher set in rural Missouri. The animatic pitch depicts the opening scene in the script, in which two police officers are sent to investigate a possible disturbance in an area plagued by an urban legend. Jeffery Thompson Jr’s script has received high praise from industry professionals, including from Tony Rosen, who worked on the visual effects for The Conjuring and Annabelle.

Purpose of the animatic: “To show my directorial vision of what the film would look like and also that this can be a valuable IP. This would potentially be my feature directorial debut. I want producers and financiers to take me seriously and to do that, I am making this short animatic. We hope this can and will eventually go viral which will only add to the IP itself.”

“The Dark Offerings” is on Amazon Prime