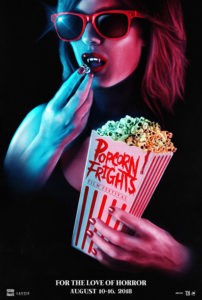 EAST COAST PREMIERE. Mia Wasikowska and Christopher Abbott star in this lusciously filmed adaptation of Ryū Murakami’s novel (writer of Takashi Miike’s Audition) that delves into the darkest domains of human nature with a color-saturated tale of deviant desire and unspeakable urges. In this pulsating psycho-sexual thriller, a young man faces the terrible fear he will stab his baby daughter. He decides that killing a young prostitute will alleviate the building tension inside him and protect his baby and his sweet wife. He plans everything meticulously, but what he doesn’t bargain for is that his intended victim, an S&M call girl, is as disturbed as he is. Not for the squeamish or faint-hearted, Piercing blends cold-blooded tension and unexpected humor with a rousing soundtrack of giallo tunes by Bruno Nicolai and legendary outfit Goblin.

REWIND (Directed by Rubén Pérez Barrena): On Halloween night during a thick fog a college girl finds herself suddenly harassed by a terrifying unknown presence. 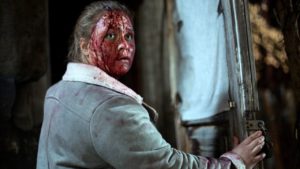 NORTH AMERICAN PREMIERE. A chilling-to-the-bone creepfest about an antique camera that appears to hold the power of life and death over those who use it. A handful of teenagers have no idea what dark secrets are tied to the mysterious camera they stumble upon in a cabin in the woods, but it doesn’t take long for them to discover that those who have their picture taken meet a gruesome end. Be prepared to cling to the edge of your seat, tense with suspense, as this tale never lets you off the hook.

MILK (Directed by Santiago Menghini): On a late night, a young teen goes into the kitchen for a glass of milk. Upon encountering his sleepless mother, he quickly realizes things are not as they seem.

EAST COAST PREMIERE. Winner of the Best Film Award at the Fantaspoa Film Festival, One Cut of the Dead is a marvelously inventive horror-comedy that breathes new life into the zombie genre and proves there’s somewhere the apocalypse movie hasn’t yet gone. It opens with an utterly awe-inspiring nearly 40-minute single take of cheerfully gory monster mayhem before hitting the reset button and turning into an irresistibly funny satire of low-budget genre filmmaking. Packed with witty nods to classic horror movies, One Cut of the Dead has such a warm and winning heart that it’s a surefire laugh riot, for genre nuts and film lovers.

SHE CAME FROM THE WOODS (Directed by Carson Bloomquist & Erik C. Bloomquist): A campfire story comes to life for a group of counselors on the last day of summer at Camp Briarbrook.

THE DRY Available on DVD & Blu-Ray on January 18