THE HERETICS ARE COMING HOME!
A71 Entertainment & Black Fawn Distribution Set to Release The Heretics This Fall

“The Heretics, has perfected the multi-sub-genre model and delivers one hell of a fun time while doing it”

“…a film that not only deserves your time – it demands it.” 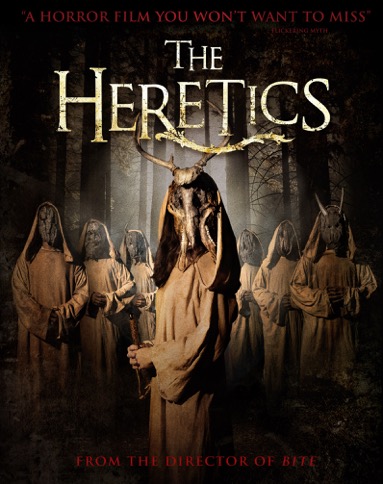 Black Fawn Distribution and A71 Entertainment are set to bring the cult-horror film THE HERETICS to Canadian home video on Tuesday, September 18th, 2018.

THE HERETICS tells the pagan tale of Gloria, a young girl who is abducted by a troubled man who claims that a cult is hunting her down. His goal is to protect her until sunrise but, while restrained, Gloria falls deathly ill. While her friends and family desperately search for her, the source of her illness becomes more apparent. She’s not sick… she’s changing.

“We travelled to festivals all over the world with “The Heretics” and we couldn’t be more excited to bring this film home this September,” states director Chad Archibald. “We’ve got a Blu-ray/DVD combo pack locked and loaded with special features specially designed by the creative teams at Black Fawn Distribution and A71.”

The Blu-Ray/DVD release will feature Director and Producer commentary, Behind the Scenes Featurette, an inside look at THE HERETICS’ European Festival Tour and more. As part of the home video release, Black Fawn Distribution will also be offering an exclusive THE HERETICS BLACKLIST PACKAGE which will include signed copies of THE HERETICS on Blu- Ray/DVD, mini lobby cards, on screen props from the film, cast autographs, a “Summon Your Own Demon” kit and more. You can get Blacklisted today by pre-ordering your package right here: Black Fawn Distribution

A71 is a dynamic boutique distributor on the Canadian Feature Film landscape. A71 Entertainment focuses on acquiring award-winning and festival selected feature films applying high level strategic thinking to all acquisitions from the earliest possible stages of a film’s development. The company sets itself apart by virtue of a commitment to marketing a title on all levels, from industry to audience, with a specific commitment to reaching and building a broader audience in Canada, while considering the holistic saleability of the product internationally.

Breakthrough Entertainment Inc. is an award-winning producer and distributor of premium content for worldwide audiences. The entertainment studio’s operations include the development and distribution of feature films, television and digital content; international co-productions and production services. Breakthrough’s digital media division ranks amongst the industry’s most respected producers of high quality interactive entertainment on mobile and online platforms. Established over 30 years ago, Breakthrough’s library now boasts over 40 feature films and 4000 television episodes which air on major networks and digital channels across the globe. The studio has been recognized with international awards including numerous Geminis, Canadian Screen Awards, and Canadian Comedy Awards.
Web: breakthroughentertainment.com

Black Fawn Films is an award-winning Canadian film production house dedicated to bringing amazing Canadian talent together in order to create horror films for horror fans. With 15 features (Antisocial, The Drownsman, Bite) and over 100 music videos (Monster Truck, Mötley Crüe, Theory of a Deadman, Megadeth, Matthew Good) under their belt, Black Fawn has become a staple in the Canadian and international film industry. Black Fawn’s distribution arm, Black Fawn Distribution, is also responsible for the physical release of multiple horror films within Canada.