Survival would mean uniting to fight the dead… 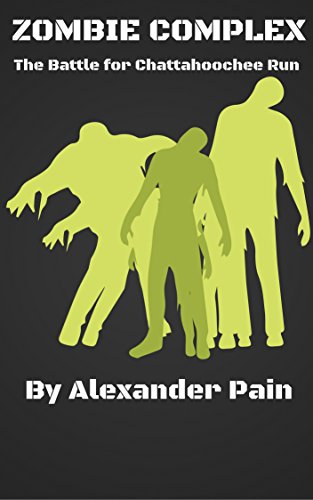 The neighborhood smelled bad before the dead people shuffled in. Jake and Karen lived in an apartment complex that housed a hodgepodge of cultures—some of which cooked the nastiest smelling foods. When zombies arrived between paychecks, the couple had no place to go and no money to get there. Their neighbors were mostly guest workers from India. Their homes and families were 12,000 miles away. They were all trapped together. Survival would mean uniting to fight the dead. This is the story of very different people coming together, improvising, getting supplies, and uniting for the fight of their lives. They made their stand at a place called Chattahoochee Run Apartments–a place that will always be known as the Zombie Complex! 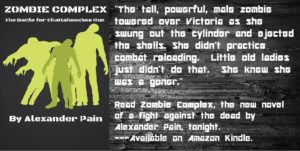 “The pace of the story was good and the plot interesting without being predictable. The main character had faults in that he was a “chunky monkey” and certainly not in the best of health or fitness. An absorbing sub-plot with the cultural differences within the complex residents. Healthy dose of humour helped the flow of story. Kept me entertained and that is all I require from a book.”

“Like the main characters had a lot of action. I read it in one day. It was easy reading. Hope there’s a next book”

“I liked this book quite a bit. The author doesn’t try to re-invent the genre with some kind of “twist” on the traditional Romeroesque zombie. What he does is tell a good story filled with relatable characters trying to survive.This book isn’t about a super-soldier tasked with saving humanity, it’s a fat guy who loves his dog and his wife (and guns) doing his best to keep his group alive and, hopefully, develop a love of curried food. I hope Mr. Pain continues with the series; self publishing is hard and my kindle library is full of indie authors who abandoned promising zombie series after 1 or 2 books.”

“Alexander Pain has written a very good Zombie story with lots of action to keep the story hopping. As a first in a series the book is well established for expansion with evil adversaries, zombies galore and strategic allies. I look forward to the next book in the series, you will not be disappointed if you give this wonderful story a chance.”

“Zombie Complex: The Battle for Chattahoochee Run is a very simple read, that does not mean it is not A wonderful story. Just the opposite, it is well thought out, no weird names viruses or complex reasons why the people die and come back as zoombies. If I day any more other than that I will be giving away spoilers. So, just take a chance. I did and I am looking forward to the next installment.”

“I usually don’t take time to review but I’m making an exception for this book. The characters in this book are real people to whom most American can relate. They live in an apartment complex. They are dealing with credit card debt and regular job worries when the apocalypse starts. Yet, these normal become extraordinary when they decide to organize their neigbours together in order to survive.”

Join this fight for survival by getting your copy today at: 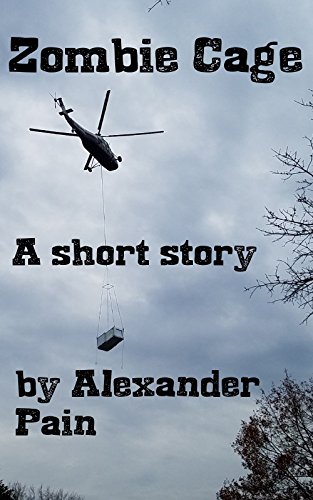 What are zombies? Are they alive, dead, or undead? Do they have thoughts? What rights might they have? The only way to know is to immerse a hastily assembled team of scientists and security personnel directly into the heart of a zombie apocalypse.

In this short story, a courageous team is rushed to the scene of a Zombie outbreak in Atlanta. They are deposited right into a swarming horde of zombies to discover things about the horrific beings. In the name of Zombie science, they land amidst the chaos protected only by a steel cage. In the process, they break ground and make discoveries that will shock and horrify.

Zombie Cage is a short, brutal, journey of discovery. As a 3596-word short story, it is a short read that is perfect for those times when you just want a quick dose of horror.

Enjoy this quick read by getting your copy today at:

Into guns, knives, and zombies, Alexander Pain lives on the outskirts of Atlanta, Georgia. By day he has a respectable office job. By night, he chronicles the zombie apocalypse and posts fliers advertising his work.

No stranger to swamp things, Alexander is a graduate of the University of Florida.

-Read more about his books and short stories

-Learn more about him

You can also read his latest blog posts at: http://worldsofpain.blogspot.com

Interview with Chris Bell, Director of “The Heiress”