Ten Questions with Kristian A. Söderström, director of VIDEOMAN 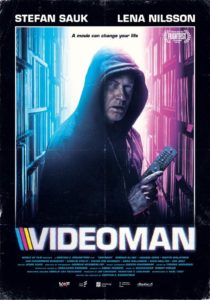 -FrightFest: So Kristian A. Söderström, who are you, where do you come from and what’s your creative arts background?

-Kristian: I grew up in Gothenburg Sweden and was a film fanatic from the start. I got me an education in film directing from UCLA in Los Angeles, but I’ve studied film theory and psychology as well. For many years now, I’ve been making short films and commercials while trying to finance feature films. I write and direct.

-FrightFest: What’s the Swedish horror movie scene like? Is it a vibrant culture? Or has it been very limiting and hard for you to break through?

-Kristian: I would say that the Swedish horror and genre scene is almost non existent. I’ve had a lot of problems financing films. Some years ago I was asked by a commissioner at the Swedish film institute if a script I submitted was supposed to be a horror film or a drama. I answered ”It’s supposed to be both.” That was something they could not tolerate. Anyhow, horror has never been a popular genre with the film financers in Sweden. Experimental stuff is also tough. At the moment it seems like you either must make a nordic noir, a comedy or an obviously ”important” film. There are always exceptions to this off course, but generally speaking, not.

-FrightFest: Is the movie autobiographical, are you that central VHS collector, Ennio, and is that your house covered in fabulous Italian posters and wall-to-wall videos?

-Kristian: The main character, Ennio, is a combination of three people I know. One of them is me. So there are definitely autobiographical moments in there. It’s not my house depicted in the film, altough I own a lot of Italian movie posters. I collect them, as well as movies.

-FrightFest: You are clearly a massive Italian horror/Giallo fan, so in keeping with the playful atmosphere of movie choose: Dario Argento or Lucio Fulci?

-Kristian: That is a really tough adoration match…I will go with Argento though. He was the one that got me into italian genre cinema and his filmmaking inspired my desire to make movies.

-FrightFest: The ‘stolen’ video is ZOMBIE, any reason why you picked that title?

-Kristian: In Sweden in the early 80s, we had a similar thing to the UK to Video Nasties. A distributor called ”Video Invest” put out 26 horror titles. After a debate on national telly, these films were quickly banned from the video stores. Many years later these titles, from this particular distributor, became a VHS collectors wet dream. Therefore I wanted it to be one of these. Zombie, which for some reason carry the cover of ”City of the Living Dead”, was chosen because of the cover art, which I love. It’s also a Fulci film. The main character has a thing for Fulci, the same goes for me.

-FrightFest: Of course Ennio’s VHS obsession is yet another of the many addictions you depict. Is that what VIDEOMAN is really all about?

-Kristian: On the surface it’s a film about film fanaticism and 80s nostalgia. Thematically, it’s a movie about loneliness, passion and addiction. The starting point of this film was me meeting a video store owner who had not taken a vacation for 14 years. He seemed to be imprisoned by his passion (films). The thought of how something you love can lead to loneliness and exclusion was something that really appealed to me.

-FrightFest: Stefan Sauk from THE GIRL WITH THE DRAGON TATTOO (Swedish version), Lena Nilsson and Martin Wallstrom (‘Mr. Robot’) are your main stars and they are all terrific. How did you go about casting them?

-Kristian: When deciding on which script to make as my low budget feature debute, my path crossed with Stefan Sauk, whom I kind of forgot as an actor. I liked him very much many years ago when he was making a very far out thing on television. I realised that he could bring the black humour and desperation that I needed for the main character Ennio. Stefan being long time absent from feature film work also fitted Ennio, who is trying to make a comeback, life-wise.

Lena Nilsson was an up-and-coming star in the 80s. She also had not worked in movies for many years. Stefan told me I should see her as he thought she was great. I did and was blown away by her naturalistic presence. Simone, who Lena is playing, like Ennio, has gotten stuck in the 80s. Both these characters were succesful back then, that’s why they’ve gotten obsessed with trying to evoke these times anew. Life seemed to be imitating art a bit with these two actors.

Regarding Martin Wallström, I had been a fan long before MR Robot. In Robot he was so amazing and he got so much hype that I thought it impossible to get him in my small movie. He loved the script though and the rest is history.

-FrightFest: Your poster tag line is ‘A Movie Can Change Your Life’, do you truly believe that?

-Kristian: Well yes, I think that’s possible. In the case of Ennio in ”Videoman”, the Zombie film becomes a financial life savior, like the bicycle in ”Bicycle thieves”. In real life I think that a movie can have a very strong impact. It can hit you in many different ways. It can make you question yourself and others, it can make you obsessed and so on. Sometimes you will never be quite the same after watching a particular movie. In a small way, or a big way…

-FrightFest: Great score by Waveshaper and Robert Parker, how did that come about?

-Kristian: It’s great, isn’t it! John Carpenter is the reason that I wanted to have analogue synths on the soundtrack of my first feature. I loved him and his scores since forever. I’ve been a fan of the neo analogue synth movement ”Synthwave” since Nicolas Winding Refn’s ”Drive”. When I realised that Waveshaper, whom I adored, was actually Swedish, I had my producer track him down. Through Waveshaper I got to Robert Parker. These two side by side felt like a match in heaven, in order to reach the whole pallette of feelings in this genre bender of a movie.

-FrightFest: You describe VIDEOMAN as “Dario Argento meets Mike Leigh”. Can you explain some more?

-Kristian: Dario Argento and Mike Leigh are two of my greatest influences. I’d like to combine realistic filmmaking (Leigh) with genre elements (Argento). I love complex characters that feels like real human beings and I also love the mood and storytelling of horror films. I feel like there often exists a segregation between commercial and ”important” movies, such that it must be either or. I want to change this. I think people like Ben Wheatly, Alice Lowe and Peter Strickland are breaking down barriers like these. They are very inspiring to me. ”Kill List”, ”Prevenge” and ”Berberian Sound studio” are masterful and innovative filmmaking.