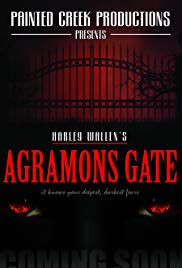 A psychic reader and Medium is invited to a party. Something goes very wrong and something comes over from the other side to haunt the people from the party. They must solve the mystery before it’s too late. Agramon will not be easy to stop.

“When I wrote Agramon’s gate this was one of the scripts that came out really easy. I wanted to make a horror movie with a good storyline that had good plot and great characters. So writing it pretty much poured right out after I figured out the components, characters and story. I was always a fan of horror movies that offered more than just gore. I love when there is a great story, strong suspense and some mystery along with some jump moments and some gore and frights! I really feel we brought that to life in Agramon’s Gate.

In the story we follow Richie (Kris Reilly) who at a young age killed his abusive father Carter (Yan Birch) and as if that’s not enough his mother Sharon (Laurene Landon) was convinced the demon who took her husband now had also taken her son. On that day Richie didn’t just lose his father but also his mother who got committed to a mental institution and she never let go of her beliefs that her son had become just like her husband. On the housewarming party arrange by his wife Cassidy (Kaiti Wallen) they bring a psychic medium Vesna (Aphrodite Nikolovski) and at the seance everything goes wrong as it appears Carter is back! She turns to her mentor Zeb (Harley Wallen) to figure out what to do. Quickly they learn it’s not just as simple as a ghost or spirit but it’s something much darker and powerful.

I must say as a director it was a great journey and some really electric performances from my outstanding cast and with a solid team behind the camera I can’t wait to bring this to the audiences to go for a ride with us!”

THE REEF: STALKED – In Theaters, On Digital, On Demand and Streaming on Shudder July 29