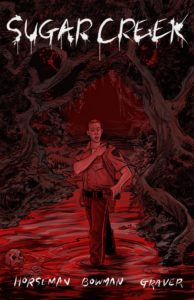 The village of Sugar Creek, Ohio is, at first glance, an unremarkable place, a “wide-spot-in-the-road” on the verge of its 200th anniversary. Yet the land contains a dark history far older than the village itself, one of repeated slaughter and bloodshed, that has nurtured an unspeakable horror at its heart. This horror now threatens to burst forth into the light of day. This 32-page story, rendered by Ohio artist Brent Bowman, depicts the extent to which a place can become a monster.

Sugar Creek began as a screenplay for a short film, based on a concept by Ohio graphic designer and filmmaker Will Graver. We plan to revisit the film concept in the near future, but in the meantime, it became the foundation of a horror comic set in rural Ohio, inspired by Ohio history, and incorporating a creative team entirely based in the Buckeye State.

Click the pic and help bring this horror comic to life by supporting this campaign today:

-Be drawn in as a character in Jim Corrie’s journal! You can be one of several “Legend of Sugar Creek” characters from the 18th – 21st century!

Visit Sugar Creek on Kickstarter to…

-Learn the inspiration for Sugar Creek

-See more images from the comic

You can also find more information at: