It’s half tabletop game, half role-playing game… all fun…

Slaughter is a NEW BREED of storytelling game. It’s fast, fun and super easy to learn!

Slaughter lets you and your friends collaboratively spin outrageous horror movies. Every story is unique. Every story wildly imaginative.

Using the innovative Slaughter Adventure Decks, you will create any horror movie you can image – and even more that you can’t.

To start, the game comes with two decks of cards one being…

“You will all die… one by one… bwhahahaaa!”

A crazed killer is on the loose! An ancient evil best left undisturbed has awakened. A monster from another world is hunting. No one is safe.

This essential Slaughter adventure deck gives you unlimited options to weave stories where a hidden and seemingly unstoppable killer picks off victims, one by one.

In classic “slasher” movie style, the Death Stalks adventure deck starts with our hapless cast in peaceful and relatively familiar, though isolated, environment.

While the cast knows and (supposedly) cares for each other, dark secrets lurk. As the story unfolds the superficial pleasantries and friendly smiles give way to base human flaws and vices.

Beneath everything good, lurks death and pain. 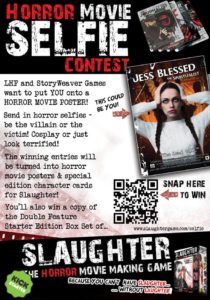 While waiting for the Kickstarter campaign to start, Slaughter is running a fun contest with The London Horror Festival…

The #SlaughterSelfie competition gives horror fans the chance to be turned into a “horror movie poster” character card that will be included in the Kickstarter limited edition boxed set. Plus they will win a copy of the game!!! We’ll be choosing six winners.

To enter, all you need to do is post a Selfie of yourself in a horror pose – you could be a villain or a victim, gorgeous or gory, monster or maniac. Your choice! Post your selfie on Facebook, Instagram or Twitter with the hashtag #slaughterselfie and #lhf2018 or submit directly via your mobile phone at:

Winners will be announced Nov 1st.

After being honed and play-tested over several years, Slaughter is in the final stages of art and layout. It will go into Kickstarter shortly, once they’ve bedded down the layout, so backers will know that the game is good to go into print as soon as the Kickstarter successfully funds.

Until then visit www.storyweaver.com/slaughter.html to…

-Read about how easy the game is to play

-Find out more about the two deck of cards, and future ones

-Learn what else will come in your box set