Below find out how you can win admit-two passes to see an advance screening of “Halloween” on Tuesday, October 16th at AMC Aventura, Aventura, FL. at 7:30pm! 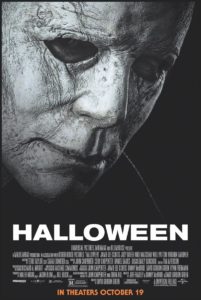 Halloween is also produced by Malek Akkad, whose Trancas International Films has produced the Halloween series since its inception, and Bill Block (Elysium, District 9). In addition to Carpenter and Curtis, Green and McBride will executive produce under their Rough House Pictures banner. Ryan Freimann also serves in that role.

Halloween will be distributed worldwide by Universal Pictures.

Rating: HALLOWEEN has been rated R (Restricted – Under 17 Requires Accompanying Parent or Adult Guardian) for horror violence and bloody images, language, brief drug use and nudity.

To learn more about the film, please visit the film’s website at www.HalloweenMovie.com.

-Enter by emailing us at HorrO@PromoteHorror.com. Please use “Halloween in Aventura” in the subject line.

-Winners of the admit-two passes will be picked at random on October 11th!