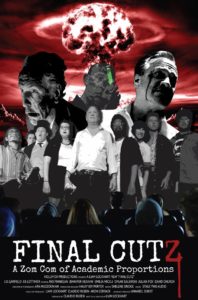 FINAL CUTZ unfolds during the last days of the semester at a failing art school, when a fire breaks out in an abandoned campus building once used as a military hospital. Sound familiar? As students race to finish their zombie-themed film projects, a radioactive virus unleashes a real invasion of the living dead.

To help raise the remaining funds needed to complete their production, the filmmakers have launched a crowd-funding campaign at Indiegogo (https://igg.me/at/finalcutzthemovie) that runs until Halloween. For more information and to view the trailer, visit the “Final Cutz” website at https://www.finalcutzthemovie.com, or friend them on Facebook.