Check out the official event poster for HORROR-RAMA 2018 by Toronto artist Matthew Therrien!

The poster will be available for sale at the HORROR-RAMA shop inside the venue. 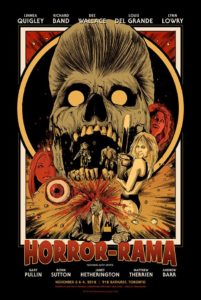 Get ready to blow yer brains out, Toronto! HORROR-RAMA – Toronto’s ONLY straight-up HORROR and CULT MOVIE culture convention – is coming back for its FIFTH and FREAKIEST year!

Special guests announced thus far are THE HOWLING and CUJO legend Dee Wallace, SCANNERS, SEEING THINGS and OF UNKNOWN ORIGIN star Louis Del Grande (in his FIRST EVER convention appearance, along with his wife and SEEING THINGS co-star Martha Gibson, who also appeared in BLACK CHRISTMAS and the remake of Stephen King’s IT!), RE-ANIMATOR and FROM BEYOND composer Richard Band (in his first Canadian appearance), RETURN OF THE LIVING DEAD icon Linnea Quigley, artist Ghoulish Gary Pullin (RUE MORGUE. MONDO) and THE CRAZIES and SHIVERS legend Lynn Lowry with many more AMAZING icons of strange cinema TBA soon! HORROR-RAMA 2018, which once more sets up shop at the wild and labyrinthine art space and converted Buddhist temple at 918 Bathurst Street. Two levels of killer guests, vendors and attractions and a whole mess of weird rooms with cool stuff inside them!

In addition to the typically wicked array of awesome panels, screenings and endless rock ‘n’ roll, HORROR-RAMA 2018 will also unroll our FIRST EVER International Short Film Festival, featuring a tidal wave of amazing cinema from all around the putrid planet!

And we’re teaming up with The Revue Cinema’s DRUNKEN CINEMA for a special Saturday night screening of RETURN OF THE LIVING DEAD in 35mm, hosted by Linnea Quigley herself!

Enjoy beer, wine, coffee and snacks in our NEW “Creep Cafe” bar and restaurant! RIGHT THERE ON PREMISES AT THE SHOW!

Buckle in, you freaks, geeks and fabulous fiends! Toronto is gonna get GONZO this year!

Sign up for the official Horror-Rama Newsletter and stay informed!