The makers of award-winning folk horror feature “Dogged” completed a 16 day shoot on location & in the studio on the film. Directed by Richard Rowntree and starring Buck Braithwaite, Nadia Lamin, Abbey Gillett, Omari Lake-Pottinger, Gregory A Smith & Toby Wynn-Davies, the film will now go into post-production with an anticipated completion date set for Spring 2019.

Once again penned by director Rowntree and co-writer Matthew Davies, “Nefarious” is set to be a twist on the home invasion sub-genre, and was funded by enthusiastic supporters of the project & filmmakers through the crowdfunding platform Kickstarter. 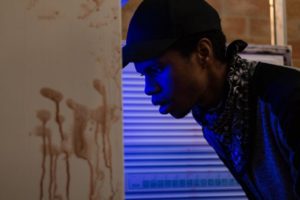 Synopsis:
“Sometimes, you have to turn to crime. Sometimes, it turns on you…

Darren, Lou, Jo and Mas live a meagre existence on the fringes of poverty. Indebted to the criminal kingpin of their social housing development, they routinely fear for their lives.

On the other side of town, the already wealthy Marcus and his mentally handicapped brother Clive receive a windfall in the form of a winning lottery ticket.

When their worlds collide following a botched robbery, the would-be criminals get more than they bargained for, and will be tested to their limits in a desperate attempt to survive a predator of monstrous proportions.”

Following the successful tour of “Dogged” on the festival circuit and a physical and digital release in both the UK and North America by Left Films earlier this year, the production team have wasted no time in bringing their second project to camera – and the stills look like it will offer the audience a very different kind of film this time around. 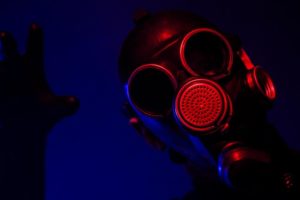 Ash Mountain Films was formed in 2013 in Slough, Berkshire. Headed up by Richard Rowntree, Matthew Davies, Christopher Foulser and Lee Wignall, the company completed their feature “Dogged” in 2018 as well as having made seven short films to date. Their films have screened and won multiple awards in the UK, USA, Canada, Mexico and Italy among others, they operate with low budgets and high expectations.

“Nefarious” is their second feature length film, and they have a slate of further pictures in the horror genre on the horizon.