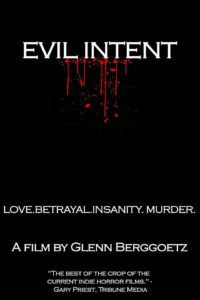 The horror/thriller feature film “Evil Intent” has recently become available for streaming on Amazon (https://www.amazon.com/Intent-Andrea-Rabold-Berggoetz-Giovanna/dp/B07G3JTWFJ/ref=sr_1_4?s=instant-video&ie=UTF8&qid=1541420195&sr=1-4&keywords=Glenn+Berggoetz). The film stars Libby Baker, who just weeks ago made a guest starring appearance on the CBS Network hit show “Criminal Minds.” “Evil Intent” was written and directed by Glenn Berggoetz, who also wrote and directed the thriller “Paralyzed with Fear” that stars Kane Hodder and is due for release in early 2019.

“Evil Intent” received a limited theatrical run in 2013 with critics saying the film is “the best of the crop of the current indie horror films” and “the twists and turns… keep this one locked in the memory.” To view the trailer for the film, go to https://youtu.be/dddX7FJfvJU.