This November, Gloria is transforming into something very, very strange.

From director Chad Archibald, and in the tradition of Cabin in the Woods and Hereditary, comes The Heretics on demand from Uncork’d Entertainment.

A young woman (Nina Kiri of ”The Handmaid’s Tale”) is abducted by a strange man who claims that a cult is hunting her. His goal is to protect her until sunrise but while restrained, she falls deathly ill. As her friends and family search for her, the source of her illness becomes more and more apparent. She’s not sick…she’s changing. 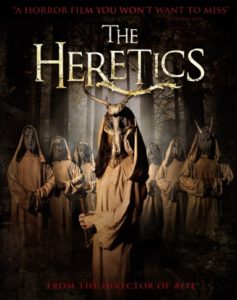 -PH: What does The Heretics, as a title, refer to?

-Chad: A Heretic is someone who believes in a religion that’s at odds with what is generally accepted. This film is about a group of people who believe in worshiping another god. I have always been interested in the religious race. What religion if any will be the first to prove they are right.

-PH: Have any films or filmmakers from your youth -heck, even now – influenced this one? How so?

-Chad: I would say cult films like Kill List influenced me when creating this concept. I’m also a huge fan of Season 1 of True Detective so I definitely watched some of those episodes with our production designer Vince Moscowek.

-PH: Growing up, did you have a favorite or go-to scary movie?

-Chad: When I was young (like grade 2) my parents started letting me watch horror films and I became obsessed. I remember I would have nightmares from them but I’d promise myself not to let my parents know for fear that they wouldn’t let me watch them any more. I loved all the classics growing up. I think Hellraiser was my go to. I remember I watched Hellbound when I was 8 and it blew my mind. I loved it.

-PH: There’s different types of horror films – where do you think this one fits? Do you personally like one sort of horror movie over the other?

-Chad: Horror has a ton of different genres within itself. I’m a fan of body horror so there’s some of that in here, some demonology, a capture film with a little dash of slasher in there. It also has some twists and turns that are fun so it’s a mix of a couple horror sub-genres.
I think regardless of the kind of horror, you should still have a solid story at the core. I like films where you could strip all the horror out of it and you would still have an engaging story that could work on it’s own.

-Chad: Black Fawn Film’s is all about the practical effects. Anytime we can create an effect in camera, we go for it. We’ve been working with some low budgets so relying on VFX is risky. If we do an effect on set we can tell if it looks good right there and we don’t have to worry about it being a cheezy VFX shot in the final film.

-PH: They say horror is the ‘easiest sell’. Was that your experience? And how did Uncork’d get involved?

-Chad: It’s tricky because there are so many horror films out there, that you still need to make a good horror film to sell it. Overall though, what is great about horror is that when people are looking to watch a horror film, they base their decision on the story and if it sounds scary more than “Who is in it?”. For example, people watch Comedies based on who is in the film. Horror sells itself on it’s concept.

-PH: If the movie were part of a double feature at a drive-in theatre, what would make the perfect support/second movie?