The first official trailer for ambitious Midlands short film Off Grid has launched this week as part of a new crowdfunding campaign to raise money for the film’s special effects and final post-production. 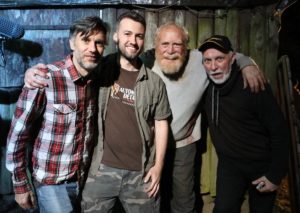 Off Grid is directed by director/producer Carl Timms and written by Mark Brendan, through their production company Dark Matter Films and was shot over the summer in Bewdley and Alvechurch. It tells the story of elderly couple, John and Grace Tanner, who have fled deep into the forest following an apocalyptic event. There John fights to protect his frail wife, and his own sanity, from a supernatural threat. The arrival of another survivor forces John to assess if he is an ally or a threat, leading to revelations that could shatter the sanctuary he has built for them. 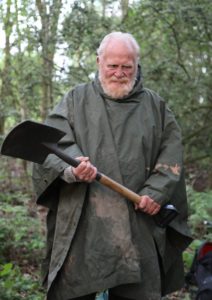 Bewdley-based director Carl Timms says, “We are delighted with how the filming turned out. We feel honoured to have worked with such a talented cast who brought these characters to life exactly as we hoped. Off Grid is a hard-hitting, intense drama that tells an ambitious, character-driven story in just 20min. To make it work we needed actors with real gravitas and they delivered beyond our hopes. But credit must also go to our amazing crew who all worked so hard to make this the best it could be. It’s hard to single individuals out but I want to thank director of photography Paul Ullah for the gorgeous look of the film and practical effects designer, film veteran Stuart Conran (Shaun of the Dead, The Descent, Eden Lake), who I worked with on my previous short Still and yet again delivered some brutal and effective visual effects with very little resource!”

Hampshire-based writer, Mark, adds “When we were thrashing the story out, we set out to avoid the traps of many shorts. We didn’t want this to feel like a single idea sketch or a one location day or night drama, and so our aim was to tell a fully-rounded story with characters with real depth: a feature in 20min. Seeing that ambition brought to life in this way on the screen has been a real pleasure and we cannot wait to get the film over the finish line and into festivals. We need the support of genre fans and lovers of dark, horrific tales to get behind the film and help make this happen.” 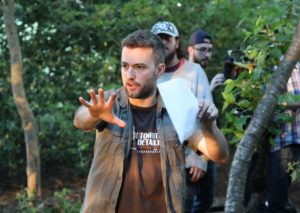 The Indiegogo campaign with a target of £5,000 for Off Grid launched 25th November. All funds raised are being put into post-production of the film, including CGI effects work, grading, sound design and final mastering. The ‘perks’ on offer include an Associate / Executive Producer credit including tickets to a premiere screening, sponsorship opportunities for local businesses, digital and DVD copies of the finished film, limited edition artwork and behind the scenes photography, and a thank you in the credits for making the film happen. If the campaign is a success, Dark Matter Films are planning an early 2019 completion date and high-end festival run.

Official Trailer: “Digging to Death” – On Demand and DVD June 1