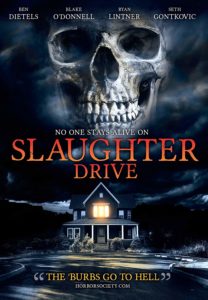 SRS Cinema is excited to announce the release of “Slaughter Drive” in partnership with MVD. The new horror feature arrives on DVD and VOD platforms on Dec. 11th.

“When failed filmmaker Doug Stevenson leaves his video camera in the local park overnight, he accidentally records something horrific. To top it off, it might have something to do with his new neighbors that moved into his quiet suburban neighborhood. With the help of his bumbling teacher buddies, Doug goes on a wild ride to save himself, his friends, his ex-wife, and the entire neighborhood! Featuring a killer throwback soundtrack and splattery practical FX, find out who will stay alive on Slaughter Drive!”

“Slaughter Drive” is available for pre-order on DVD at Amazon.com, Walmart.com, Bestbuy.com and many other fine sites, and hits store shelves next Tuesday. You can also catch it on Googleplay and many other VOD platforms soon as well.