“Skin Deep was a surprising thriller to read. It keep you guessing to as who the killer was. The dynamic between Cait and Lena was great. The race to save the victims was exciting and how Lena tended to be a target for the killers. I found it hard to put this down so that I could do the daily things I needed to do. I think it’s a great book and have no problem recommending it to others.”

“Overall this is a terrific serial killer book. The story is well-written for the most part, fast-paced, action-packed and brutal. If you enjoy serial killer, murder mystery books this is definitely one you’re going to want to read immediately! If you’re picking this book up for a romance book, you may be a little disappointed. I wasn’t, so it was perfect for me! If you’re looking for strong, imperfect female leads this is perfect for you. I highly recommend this one!”

“All I can say is….wow! As soon as I began reading this book I knew I wasn’t going to be able to put it down. The way this author writes made me feel like I was there. I found myself immediately invested in the characters and nervous for what was going to happen next. I hope there are more books to come because I miss Lena Evans already!”

“Great characters, non-stop read with twists I didn’t expect. Plotline worked and at the appropriate speed. Hope to see more of these characters and books from the author. Well Done! Worth the read!”

“Fantastic read! I love the relationship between Lena and Cait. Extremely well written. I couldn’t put it down!”

Now, as the one-year anniversary of the Collins case nears, four more women have been brutally murdered—and the killer is sending video footage of their deaths directly to Lena’s inbox.

The investigation brings Lena face-to-face with her past: the Collins case, her celebrity status, her lingering PTSD—and the first woman she ever loved, Special Agent Cait Porter, who’s just been assigned to the case.

The killer gives Lena five days to figure out who he is. But the closer she gets to finding him, the more likely it is that she’ll become his fifth victim.

Get this fantastic book today at:

And don’t forget to leave a review because Amazon reviews will be entered into a drawing to win a $25 gift card at the end of December. 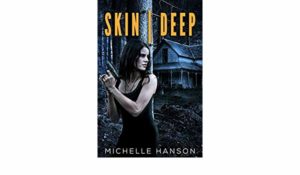 In a recent interview, author Michelle Hanson talked about her inspiration for the book…

“I usually joke that I write crime novels so that my degree in Criminology can be put to good use. A part of that’s true. But really, it’s because most TV crime dramas have detectives experiencing these horrific events in order to make the show more suspenseful; but, by the end of the episode, the detectives just walk away, completely unfazed by the traumatic events. I wanted to explore what it would be like for a good and honest detective to go through something horrible and actually dissect the trauma of that experience. In Skin | Deep, Lena has to overcome two monsters: the villain committing these terrible crimes, and the PTSD building inside her.”

MICHELLE HANSON is a writer, director, producer, and photographer. She writes detective novels so her degree in Criminology can be put to good use. Michelle is an avid fan of the horror genre, and spends most of her free time volunteering at a local theatre. Her photography has been published in newspapers and online magazines/blogs. Michelle is the creator, director and writer of the supernatural lesbian web series, Red Rue. She also wrote and directed Gül Girl, and the upcoming psychological thriller, Veho (Fearopoly Films). Michelle is married, and has two dogs and three cats. She hopes to see her novels turn into a movie or television show one day (Netflix, are you listening?).

You can find more from Michelle at:

Interview with “Tigers Are Not Afraid” Director Issa Lopez